Of Vietnam’s 54 ethnic groups, several consist of a few hundred people living in remote mountain areas. The O Du in Nghe An province is one of the groups with the smallest populations.

O Du elders say that they once had their own territory and lived independently from other ethnic groups.

In the distant past their ancestors belonged to a small kingdom called Bon Man, an autonomous region covering Xiangkhouang and Houaphan province in Laos and parts of Vietnam’s Nghe An province.

In the late 14th century, the O Du went through some troubled times. They fled their homes and were chased and hunted to every corner of their territory.

The survivors had to hide their origins, language, customs, and names and mingle with other groups. For that reason the O Du culture and lifestyle are strongly influenced by other ethnic groups, particularly the Thai and the Kho Mu.

“Nowadays, there is no pure O Du family. They married Kho Mu or Thai people. It’s one reason why the O Du are the 2nd smallest ethnic group of Vietnam’s 54 ethnic groups,” said Professor Dang Nghiem Van of the Vietnam Museum of Ethnology.

The O Du no longer speak their original language, which belonged to the Mon-Khmer language family. They now speak a mixed Thai-Kho Mu language.

As the O Du moved from place to place, their culture faded. In 2006 with their life finally stable, they had to relocate once again to give up their land for the construction of the Ban Ve hydropower plant. They resettled in a new hamlet called Vang Mon, in Tuong Duong district.

A difficult life hasn’t suppressed the strong vitality of the O Du. A population survey in 1935 showed that the O Du had just 34 people. Now there are about 500 people of O Du origin, living in mixed households of O Du, Thai, and Kho Mu people. The O Du live in stilt houses with rattan roofs.

“In an O Du house, the altar has a different placement and different items from an altar of the Kho Mu. A Kho Mu altar is placed in the last room of the house, the most secluded and private spot. The O Du hang their altar above their sleeping area. From the altar, we can identify whether a family is O Du, Kho Mu, or Thai,” said Professor Van.

The O Du don’t know much about modern science. One of their oldest customs is to listen to the first thunderbolt to mark a new year.

“The O Du don’t celebrate the lunar New Year Festival. They estimate when it’s time to clean their house and await the first thunderbolt, which signals a New Year. Then they perform rituals to thank the Heaven Gods and deities for giving them life and protecting them. They give offerings of their best food and farm products to the gods. The first thunderbolt symbolizes reproduction and fertility,” Professor Van explained.

When they hear the first thunderbolt, young and old run to the river to wash their bodies in the hope of receiving good luck. 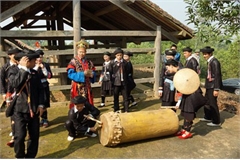