Vietnam on focus of African friends and partners

Inspired by recent remarks from Vietnam’s Ambassador to South Africa Hoang Van Loi, about a forthcoming study visit to Vietnam by a group of African policy specialists and influencers,

we have approached the Johannesburg-based organisers to justify our curiosity.

It is not easy to be granted an interview with the Director of the Brenthurst Foundation, the renowned South African think tank; not only is Dr Greg Mills away from his Parktown office due to the coronavirus pandemic, but he has also been panelling numerous webinars – both for his excellent professional expertise in international relations and development in Asia and Africa, as well as to launch his latest book titled: ‘The Asian Aspiration: Why and How Africa Should Emulate Asia’, co-authored with former Nigerian President Olusegun Obasanjo, former Ethiopian Prime Minister Hailemariam Desalegn, and Brenthurst Foundation researcher Emily van der Merwe.

The book starts with images of Vietnam. Imagine, too, how this man from South Africa found himself in Vietnam in 1994, just after the birth of democracy in his own country. In the capacity of Research Director of the South African Institute for International Studies (SAIIA), an independent Johannesburg-based think-tank, and at the request of the then Department of Foreign Affairs (now Department of International Relations and Cooperation), Dr Mills was in Vietnam to understand different areas of the world that were once excluded in order to help the Rainbow Nation of Nelson Mandela’s South Africa move quickly from global isolation to integration. By that time, the Doi Moi (or renovation) policy had been carried out for 8 years in Vietnam, and the country had been emerging from a combination of years of colonialism, years of fighting and years of closed economic policy.

He maintained a close interest in Vietnam for the ensuing decade. Then, in 2005, after having started a new challenge as the Director of The Brenthurst Foundation, which focuses its work on strengthening African economic performance, he revisited Vietnam. During that visit he linked up with the Institute for Middle Eastern Studies at the Vietnamese Academy for Social Studies, and the relationship has grown ever stronger since. Dr Mills has become an advocate for Africa’s closer engagement with Vietnam. The Foundation, chaired by legendary African statesman and former President of Nigeria, Olusegun Obasanjo, enjoys the presence of several former presidents and prime ministers on its board, and is a very influential actor in providing advice to African governments on development and security matters. In order to do so, the Foundation draws on its extensive knowledge of development best-practice from other countries around the world.

Dr Mills has not limited his knowledge of the country by visits to the major cities. He spent time studying the battlefield of Dien Bien Phu in 2014. And in 2011, he undertook an epic cycling trip.

As he puts it “Cycling is a great way to see a country”. He and his wife, artist Janet, decided to put this theory to the test, and cycled 700km from Mai Chau, northwest of Hanoi, towards the south, making their way along the hill-tribes along the Laotian border through the old Demilitarized Zone to Khe Sanh, then swinging east for 70km from the mountains to the coast following the Ben Hai river along the DMZ onto Hue, Da Nang and Hoi An.

He explained that this way you can absorb the images of Vietnam rather than just view them, and of course the sights, sounds and scents are in your face rather than just behind a darkened, speeding window. His personal travels around the country has subsequently shaped his own research philosophy of personally being in the field to experience a country from the same perspective as its inhabitants. Having experienced Vietnam first-hand as both a researcher and as a tourist, and having enjoyed some of his pleasurable pastimes on numerous visits to different parts of the country, from rice fields to mountainous areas, from museums and battle sites to SEZs/IDZs, and from meeting with many influential politicians including heads of the People’s Committee of Hanoi and Ho Chi Minh City to working with some national think-tanks, he undoubtedly understands the country immensely, both in his daily life and as an academic.

Twenty-five years later, at a time when the Brenthurst Foundation researchers were back for their latest book, he sees a very different country which enjoys a high rate of growth, where the energy of Vietnamese people are now, as it has always been, directed positively towards not just survival, or independence, or freedom from external domination, or just towards unifying the country, but on growth, development and prosperity. From the many countries he has visited in his several high-level positions over the past 25 years, Vietnam’s institutions and mechanisms stand out as being an example of what can be achieved and inspired by its immediate inheritance. Dr Mills argues that while many African countries may complain that their colonial inheritance was difficult, even terrible in reality, Vietnam is a model of how to turn adversity into prosperity, despite its difficult inheritance: a difficult geography, complex ethnic and a linguistic make-up, along with four periods of colonial history from China, France, Japan and the United States of America, and also other strong influences from other countries.

In spite of periods of colonial control, all the destruction of the many wars, all levels of foreign interference, with its trade, policies and regime Vietnam has sustainably placed its people at the centre of its policies; the economy has been growing at an annual average rate of 6.4 percent between 1986 and 2018. Vietnam’s life expectancy surged from 66 in 1978 to 76 in 2018, while child mortality dipped over the same period from 48 per 1000 live births to just 16. Through an almost stubborn focus on social welfare, poverty was reduced from over 75 percent  to below 10 percent over this period. A foreign investment law followed in 1987 with foreign direct investment (FDI) growing steadily from 320 million USD in 1990 to 130 billion USD in 2018. At the same time, GDP per capita has leapt 25 times from under 100 USD in the 30 years since 1989, in the process reducing poverty from 58 percent in 1993 to under 5 percent. Vietnam’s trade to GDP ratio is at 200 percent, second only to Singapore.

In that lies a tremendous lesson: no countries in the world suffered more, Dr Mills believes, during the Cold War than Vietnam and no countries may possibly prosper more in the post-Cold War environment than Vietnam given that it has liberated itself from both external and internal constraints. That is why the Director of the Brenthurst Foundation keeps returning to Vietnam.

The Asian Aspiration could not have come at a better time – with Africa experiencing stagnating and even negative economic growth, the policy lessons from Vietnam may well serve as a template for Africa’s development. Overall, Vietnam shows that a development trajectory is by no means the inevitable result of forces outside of national control. On the contrary, they are very much within the power of political leadership. They simply have to possess the courage to make the necessary changes and, in so doing, in the Vietnam’s case, alter the fortunes of generations.

With his close relations with the Institute for African and Middle East Studies (IAMES), an arm of the Vietnam Academy of Social Sciences, the Foundation and Dr Mills have been the author and co-authors of many books, reports and article about “the Asian Miracle” covering from Japan, Taiwan, Singapore, and the Republic of Korea, as well as the more recent success of Vietnam, and their relevance for African circumstances.

Vietnam captures all the worthwhile lessons from Asia identified in the latest book, whether these be on the need for inclusive growth; the importance of adopting a forward-looking mindset; being willing to change policy tack; the need to start with the basics, in Vietnam’s case agriculture and education reforms; the central importance of opening up to business and foreign markets; the premium of good leadership; the need to make tough and pragmatic structural reforms; and the centrality of growth, per se.

So, what should be done to further deepen cooperation between Vietnam and South Africa, and other African partners? He pointed out many tools to deploy, such as best practice exercises (visits, seminars, scholarships, etc), diplomatic levers (honorary consuls, aid, education, sport,...), and regional and bilateral business-to-business forums. It is necessary to set up connections and trade between the Association of Southeast Asian Nations (ASEAN) with Regional Economic Regions (RECs) in Africa. Vietnam and its African partners can also establish a narrative and support it.

Developing the narrative for a new

Vietnam-Africa history should include key messages of a fresh collaborative, mutually-beneficial history, founded on the past, built on the future; a best-practice reform example for Africa; a modernizing partnership; large market opportunity and the potential of linking with Vietnam in an ASEAN context.

What might be the role to be played by the Brenthurst Foundation and its Vietnamese partners in the process? In short term, these institutions highly recommend making connections through make-it-easier visas and air links, conservation statements, drawing up business-to-business lists, setting up and strengthening government-to-government connections, including at local government level. As supporters, academic and analytical exchanges should be facilitated and premier scholarships for Africa and vice versa should be provided.

The Brenthurst Foundation’s 2020 publication, The Asian Aspiration, identifies the lessons in economic best-practice that characterised the Asian Miracle. Even the lessons have been written in a fairly short and accessible way, the point is how to put them into practice within African contexts. Against this backdrop, the Foundation proposes a short study tour to Japan and Vietnam in late 2020 or early 2021 – a date conditional on Covid-19. The tour group will be made up of African policy specialists and influencers (leading politicians, businessmen, international journalists) who will be able to implement and/or contribute to shaping public discourse on Asian-African relations and especially the policy options facing the African continent. The study-tour will be led by the Chairman of the Brenthurst Foundation and former President of Nigeria Olusegun Obasanjo, along with former Ethiopian Prime Minister Hailemariam Desalegn, and will be hosted by the patron and founder of the Brenthurst Foundation, Mr Jonathan Oppenheimer, a very successful South African businessman and great philanthropist.

The aim is to familiarise the delegation with the growth narratives of the two countries, both exemplars of good policy and governance. The visit will build on the recommendations from the book by demonstrating to the Foundation’s wider network what success looks like and expose delegates to opportunities that the researchers have exposed.

Even Vietnamese researchers can themselves reflect on these books. To further understand their own country, perhaps, they can establish relations with the African institutions that share commonalities in fostering better and prosperous connections which were built in Asian-African Conference (the Bandung Conference) in 1955 where one of the aims was to promote Afro-Asian economic and cultural cooperation.

From his numerous trips to Vietnam, Dr Mills has witnessed how the Vietnamese have turned history into their advantage. In his words, history is not a destiny. If history were a destiny, Vietnam would not be where it is today. History is one of many contributors, but not a sole determinant of destiny. Vietnam has more excuses than probably any other country for why it could not succeed. But the country has chosen to look through “the windscreen of the car, not the rear window”. That great message summarises Vietnam’s case.

In Vietnam and its African partners relations, close links are to be built, just as Dr Mills’ love towards Vietnam and the Vietnamese people, by viewing, engaging and supporting them./.VNA 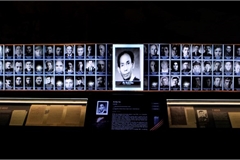 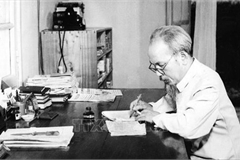 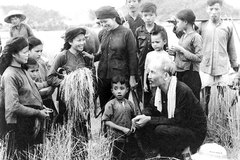 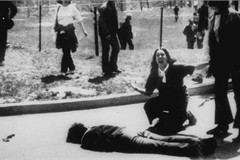 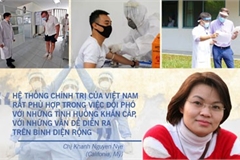