The Association of Vietnamese Intellectuals in Japan (AVIJ) was established during a congress in Tokyo, Japan, on November 14.

Its executive board for the 2019 – 2021 tenure was elected with nine members, including Dr. Le Duc Anh and post graduate Pham Van Long from the University of Tokyo as Chairman and Secretary General, respectively.

The board agreed on the action plan for the near future, including focusing on successfully holding the Vietnam Intellectual Forum in Japan 2019 themed “Make in Vietnam: Opportunities and Challenges”.

Speaking at the event, Vietnamese Ambassador to Japan Vu Hong Nam said the congress will connect Vietnamese intellectuals in Japan together to create a collective power.

He also pledged all possible support for AVJI to contribute to Vietnam’s socio-economic development as well as Vietnam – Japan friendship.

AVIJ Chairman Le Duc Anh said AVJI will serve as a bridge to create cooperation opportunities for individuals and collectives, and strive to build innovation centres to enhance science-technology exchange between the two countries.

According to the Immigration Bureau of Japan, there were over 371,000 Vietnamese people living in Japan as of the late June 2019, becoming the third largest foreign community behind China and the Republic of Korea./. 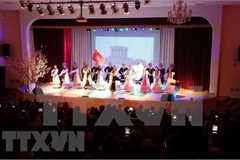