While the festival this year has been scaled down due to the COVID-19 pandemic, the key spiritual ceremony will still take place.

A special ceremony will take place next week in the Hung Kings’ Temple - a well-known historical relic site in the northern province of Phu Tho’s Việt Trì City to pay tribute to the Hung Kings- the legendary founders of the nation. 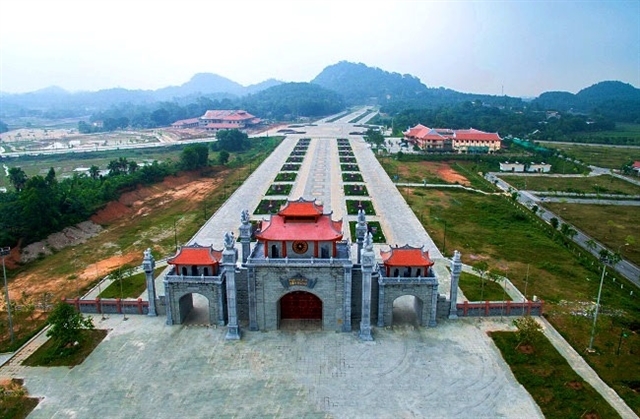 The gate of the temple from above. Photo viettri.gov.vn

While the festival this year has been scaled down due to the COVID-19 pandemic, the key spiritual ceremony will still take place.

In preparation for the event which will be held on Thursday, the final steps of the construction and upgrading of some works at the relic sites including a pedestrian bridge across Mai An Tiêm Lake and a ritual site on Phu Bung Hill at the site, are close to completion.

The works are parts of a master plan approved by Prime Minister Nguyen Xuan Phuc in 2017 to preserve and promote the value of the Hung Kings temple relic site.

Officials, workers and engineers are racing to finish the renovation work on time.

With construction beginning four months ago, the pedestrian bridge made of reinforced concrete with arched structure will link the two banks of Mai An Tiem Lake.

Tran Xuan Doanh, chief supervisor of the Song Hong Thu Do Joint Stock Company, said the construction works were conducted under very strict safety conditions ensuring the protection of the local environment and avoiding any impact on the visitor and pilgrim experience.

“We are constructing in very difficult conditions due to a narrow working site near the Den Gieng traffic point which demands very strict safety for the environment and circulation,” said Doanh.

The official said during the construction of the bridge pillars, workers had to ensure lake water was not drained.

“Roads for transporting materials are running around the lake, so it is impossible to gather all manpower there in a rush as it will affect other work in the relic,” said Doanh.

Despite these difficulties, the team are committed to ensuring they can inaugurate the bridge on the occasion of the Hung King’s anniversary this year.

They were ready to work night and day, rain or shine, according to the official.

“Up to now, the main works have been basically finished and construction is now focusing on adjusting some small works related to the leading path to the bridge and its railing design, the landscape on both sides and the outside stage area creating a synchronised landscape for Mai An Tiem Lake and the Den Gieng crossroads,” Doanh said.

Doanh said he was sure the bridge would be a highlight of the landscape offering impressive sights at Hung Temple.

On the construction site of Phu Bung Hill, adjacent to the axis of the ritual ceremony yard, the old garden with temporary houses has been relocated and replaced with a wide and clear space for the ceremony axis and the whole relic.

The project management unit of the relic site is focusing on directing contractors to accelerate the levelling of the lake, building high and low pedestrian road systems and planting more trees on the site.

After being completed, the space will also be used for cultural and arts activities including exhibitions and advertisement and presentation of local tourism products and other services.

Le Truong Giang, director of Hung Temple Relic Management Board, said the construction aimed to meet the targets of conservation and promotion for the value of Hung Temple Historic Site under the resolution of the 13th provincial Party Congress.

In the last few years, the restoration and construction in the site have attracted attention and investment from the State and the province, he said.

The management board itself advised the provincial People's Committee in collaboration with the Ministry of Culture, Sports and Tourism to set up and complete a plan on preserving and promoting for the historical and cultural value of the site, according to Giang.

“In the past five years, about 10 projects as part of the plan have been carried out in the site with more than VND351 billion (US$15 million) of investment from the State budget and donations from organisations,” said Giang.