Kon Tum, where the wild leaves are

For veteran Hoang Minh Binh, gỏi lá (leaf salad) is a speciality of the Central Highlands province of Kon Tum because the dish carries the deep characteristics of the mountain.

Binh recalled that during the American War, he was in a group of five soldiers encircled by the enemy in a Kon Tum jungle for a month.

“We faced hunger for days and though we could have killed wild animals to eat, we were being sought by the enemy troops so none of us dared to make a fire. One of my comrades told us that we should eat wild leaves to survive,” said Binh.

He said first they picked the leaves and tried them one after another because they were afraid of eating a poisonous leaf. The leaves included lá trầm (agarwood) lá ngành ngạnh đỏ (red cratoxylum prunifolium dyer) and others.

“We also dug roots from wild trees such as yam, bub of banana tree, brown tuber and others to eat with the leaves. Luckily one of my friends named Trong Hai still had a small package of salt so we cut the roots into threads and mixed them with a little salt and wrapped it in the leaves,” said Binh.

Thanks to the wild leaves and roots, Binh’s group escaped from hunger and later found their army unit after a month of being encircled by the enemy troops.

When peace resumed, when Binh returned to Hanoi he never forgot the wild leaves salad.

Binh was recently invited to join a reunion with soldiers who had fought in Kon Tum.

“We were so happy to meet each other. All of us agreed to have gỏi lá as our main course at a shop in the Kon Tum Province centre.

She said that the leaves were traditionally eaten as salads.

Binh said the dish was tastier because it included bacon and boiled pig’s skin cut into pieces mixed with minced galangal and fried shrimp wrapped with the leaves in rice paper.

Other ingredients include unhusked pepper, salt and small green chilli which carries a special fragrance of the Central Highlands’ red basaltic soil in it.

The dish is more enjoyable when using fingers to wrap it, Bang said, adding that dipping sauce also plays an important role.

The sauce is made from fermented sticky rice, dried shrimp and bacon ground well before being mixed with satay, and spices and then poured into a cooking pan over a small fire for 10 minutes, she said.

Binh said the dish has sweet flavours of bacon, shrimp, hot and fieriness of pepper, chilli and sour and greasy of the sauce in addition to the aromatic and cool flavours of wild leaves.

“I can experience sour, pungent and bitter flavours of each kind of leaf," he said.

For Binh’s fellow veteran Trong Hai, the dish in the jungle was unforgettable compared to the modern version with wild and domestic leaves, meat and shrimp.

"Despite this, I still enjoy each sort of leaf to discover more about Kon Tum and the Central Highlands through them,” Hai said.

“All of my six family members are healthy because we often eat the leave salad twice or three times a week,” he said, adding that people wishing to try the dish should visit Kon Tum’s Tran Cao Van Street.  VNS

Ant-fish salad of Ro Mam, one of the five smallest ethnic minority groups in Vietnam, has been going on for hundreds of years.

‘Goi la’: An interesting twist on the ‘spring roll’ in Kon Tum Province 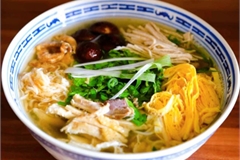 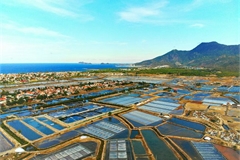 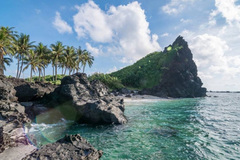