Many real estate firms which previously focused on high-end apartment projects have jumped into the tourism property segment.

Novaland, a well known real estate brand, which limited its activities in HCMC for many years, unexpectedly announced the development of resort projects in many cities/provinces, from Can Tho, Phan Thiet to Cam Ranh and Ba Ria-Vung Tau. Its products bear NovaHills, NovaBeach and NovaWorld brands, with an area of 100 hectares or more. 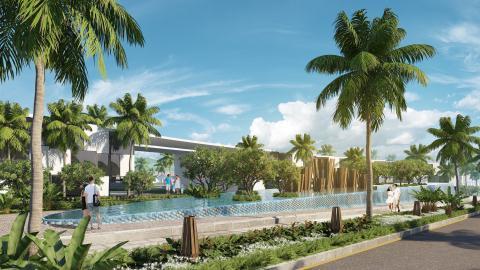 Most recently, Novaland announced a ‘super-project’, covering an area of 1,000 hectares – NovaWord Phan Thiet. After Phan Thiet, there will be another NovaWord in Ba Ria-Vung Tau. In 2019 alone, Novaland is expected to provide 2,400 tourism resort real estate products.

Betting on Cam Ranh, Hung Thinh Group has made a comeback to the resort market segment, introducing Para Draco.

In 2018 alone, the province received 2.8 million foreign travelers, an increase of 138 percent compared with 2017. The figure is expected to rise to 3 million this year.

“The growing tendency of owning a second home is leading the market as it is an effective investment channel which brings attractive profits in long term,” he said.

The other big names in the segment include Tien Phuoc, Thanh Thanh Cong, Phuc Khang, Eurowindow and LDG.

An analyst commented that shifting to develop tourism real estate projects is a new way for real estate firms to proceed as the housing market segment has cooled after many years of hot development.

He cited a report of VinaCapital as saying that the profit growth rates of real estate firms are predicted to decrease from 100 percent in 2018 to 17 percent this year.

In 2014-2017, the number of housing projects opened for sale increased by twofold year on year, which brought fat profits to realtors for many years. However, the situation has changed and real estate firms are now eyeing tourism real estate to maintain high growth rates.

Resort property market: mini hotels on the wane, homestays on the rise

The stunning features of the top-rewarded resort in Vietnam

icon
The heritage banyan at a sacred temple
icon0