Candied coconut ribbons, which are made from coconut meat, sugar, and milk, becomes a snack favoured by many Vietnamese, especially during Tet holidays.

After more than four decades of operation, the Huu Nghi coconut workshop in BenTre province, which is dubbed as Vietnam’s coconut kingdom, has regularlyproduced delicious candied coconut ribbons to serve Tet holidays.

Since the old days when food and confectionaries were less abundant, and up untilthe present day when living conditions have been improved, the candied coconutribbon producers have still kept onto its traditional recipe and method.

It’s not very difficult to make candied coconut ribbons as it does not require toomany steps, but to produce delicious ones, all steps should be given carefullypaid attention, producer s shared.

To make this snack, coconut flesh is removed from the shell and sliced intothin ribbons which are then boiled and drained. Finally they are soaked and coatedin sugar.

Candied coconut ribbons are made from natural ingredients. Besides the brightwhite of coconut flesh, people also add natural colouring to make the candiedribbons look more eye-catching, such as green from pineapple leaves, red from gacfruit, purple from taro, and yellow from durian, among others.

Nguyen Thien, who owns the Huu Nghi coconut workshop,said his workshop make dried candied coconut ribbons everyday as this productis loved all year round, used in many snacks such as ice-cream.

There are plenty of delicacies, both domestic and imported, offered for Tet,but candied coconut ribbons are still much loved as they capture the taste ofthe southern land.

To date, Ben Tre has more than 30 coconut products which are exported to over50 countries worldwide.

As it is easy to make candied coconut ribbons, manypeople can make this delicious snack at home.

During the Tet holidays, when family members and friends spend time together,the sweet and aromatic flavour of the candied coconut ribbons help them preservethe traditions of the Lunar New Year./.VNA

icon
Travel in the time of the coronavirus
icon0 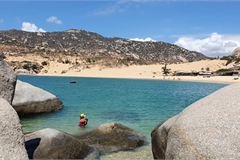