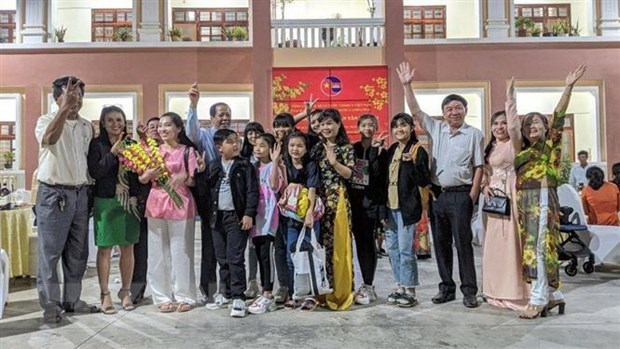 Vietnamese expatriates in Cambodia pin high hopes on the upcoming 13th National Party Congress, expecting for more effective policies and guidelines to support Vietnamese nationals who have always turned their hearts to the homeland.

Tran Van Bao, Chairman of the Khmer-Vietnamese Association in Battambang province, expressed his pride when recalling Vietnam’s good control of the COVID-19 pandemic in the past year, holding that under the sound leadership of the Party and State, the country overcame a gloomy time when it was battered by both the outbreak and serious flooding in the central region.

Bao said the Vietnamese expats are expecting that more practical support policies will be adopted at the 13th National Party Congress to help them gain a legal status in Cambodia so as to ensure stable lives for their children as well as further contributions to the homeland.

Besides, they wished for the better citizen protection work, as well as more assistance in preserving Vietnamese traditional culture in foreign countries, he added.

Meanwhile, Le Thi Thuy Linh, a teacher in Siem Reap province, hoped that the 13th National Party Congress will outline rational policies to promote solidarity among expatriates, while expecting for more programmes to support education for younger generations so that they can integrate easily into the world.

According to Vietnamese Consul General in Battambang Le Tuan Khanh, at the conference held at the end of 2020 to collect opinions of Vietnamese citizens in Battambang, Siem Reap, Oddar Meanchey, Banteay Meanchey, Pursat and Pailin provinces on draft documents to be submitted to the 13th National Party Congress, they expressed their delight at the country’s achievements across various sectors after 35 years of Đổi mới (Renewal), with high economic growth, well-developed infrastructure, improved living conditions of people, and the country’s increasing position and role on the international arena.

They have kept a close watch on the country’s development, and supported the nation’s fight against corruption as well as policies to popularise the country’s image and encourage patriotism among its citizens.

They do hope that the Party will have more practical and effective policies to create favourable conditions for them to work and live in the host nation, ensuring the Vietnamese expats are always an indispensable part of the great national solidarity bloc, the diplomat added.

icon
Many beautiful flowers available for decoration during Tet
icon0