A tropical depression centered some 550 kilometers off Quang Nam Province and some 470 kilometers from Binh Dinh Province at 1 p.m. today, October 10 is forecast to strengthen into a storm heading toward central Vietnam in the next 12 hours.

In the next 24 hours, the storm is predicted to move west-northwest at around 15-20 kilometers per hour. At 1 p.m. on October 11, the storm eye will be moving around at 15.0 degrees North latitude and 109.2 degrees East longitude, in high sea off the coastal areas from Quang Nam Province to Binh Dinh Province, with the strongest winds reaching level 8 (60-75 kilometers per hour),gusting at level 10. 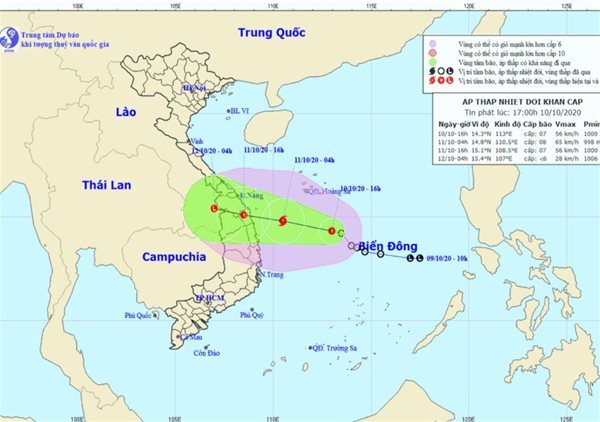 A map detailing the direction of the tropical depression, which may strengthen into a storm – PHOTO: NATIONAL CENTER FOR HYDRO-METEOROLOGICAL FORECASTING

Between October 11 and 13, many localities in the central region will experience heavy rains with rainfall measuring 500-700 millimeters, or even 1,000 millimeters, due to the storm, according to Lao Dong Online.

Due to heavy floods, Quang Binh, Quang Tri, Thua Thien-Hue, Danang and Quang Nam have evacuated tens of thousands of people from the flooded areas and those prone to landslides, VnExpress news site reported.

Owing to the bad weather, five ships were stranded in the waters off Quang Tri Province, but 20 sailors on board the ships were rescued, while two others remain missing.

Facing the same accident, another ship, Vietship 01, ran aground at Cua Viet off the province. Two of the 10 sailors on board managed to swim to the shore.

The Ministry of National Defense at 5.30 p.m. mobilized a helicopter from Hanoi City to Quang Tri Province to participate in the rescue effort. At 6 p.m., one sailor was rescued while the remaining seven sailors and one fisherman remained in the ship.

Heavy rain, strong wind and dark night have disrupted the rescue effort, so the helicopter will continue the rescue task tomorrow.

On the same day, Ha Tinh Province’s rescue forces accessed a ship named Minh Nam 07 and successfully rescued 16 sailors on board, including six residents of Nghe An, four Haiphong locals, two Ha Tinh residents, two others living in Nam Dinh, one in Hai Duong and one Indian national.

Two days after bartering central Vietnam, storm Noul has left six dead and 112 injured while damaging tens of thousands of houses across the region.