More than 2,100 people have quarantined themselves due to fears of Coronavirus infections in HCM City.

On February 9, Deputy Minister of Health Nguyen Truong Son led a delegation to visit and inspect preventive measures at the HCM City Hospital for Tropical Diseases and worked with the city people's committee about coronavirus outbreak control.

Nguyen Tan Binh, director of HCM City Department of Health said there were three confirmed cases in the city. One person has been cured and released and the other two are in good condition. 27 other tests were negative.

They have also quarantined 39 people for close contact with the patients, 11 out of them have been released and 10 are self-quarantined. All of them are being closely monitored.

Over 2,100 people have arrived in HCM City from China in the past 14 days. One person came from Hubei Province and is quarantined at District 6's quarantine centre.

The rest are self-quarantined at home. No one has shown symptoms yet.

Son praised the efforts by HCM City authorities to monitor the situation and contain the spread of the virus in the area.

How is life in quarantine center in Vietnam border town?

More than 400 Vietnamese citizens returning from China are living a military life during 14 days of quarantine at a military barracks in the border town of Lang Son.

The HCM City Department of Labour, Invalid and Social Affairs has told a number of firms that 1,079 foreign workers who recently travelled to China and returned to HCM City to work after the Lunar New Year holiday must be quarantined. 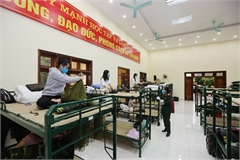