Teachers oppose use of smartphones during lessons

Many teachers have expressed their disagreement with the new regulation on allowing students to use phones during lessons, saying that it would be difficult to control students.

The Ministry of Education and Training (MOET) has released Circular 32, setting changes in regulations for secondary, high and multi-level schools. 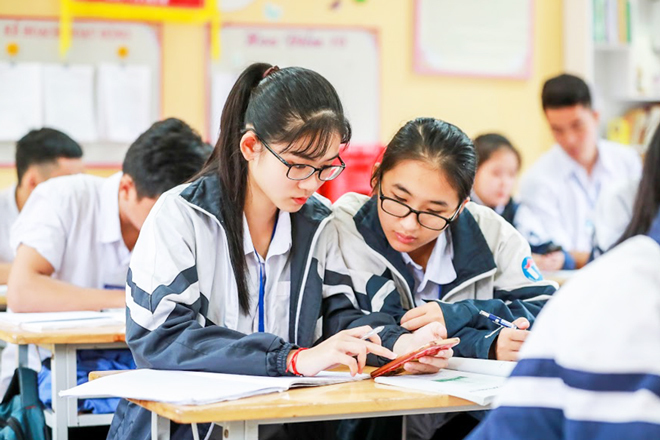 MOET said it decided to allow students to use smartphones with the consent of teachers if they need to look up information and school materials to better serve their studies.

Sai Cong Hong from MOET said on Tuoi Tre that the change aims to be aligned with the application of information technology in teaching.

Before the circular was released, general school students must not use mobile phones and music players during the lessons. Meanwhile, schools wavered between allowing or prohibiting mobile phones

V.N, a teacher at Tran Dai Nghia High School in HCM City, said it was not a good idea to allow students to use cellphones during the lessons for any purpose.

“How can students concentrate on lessons if they are busy using phones?” she said, adding that it would be more difficult to control students, especially those who are ‘addicted’ to mobile phones.

In principle, students can only use smartphones to serve their study, but teachers cannot be sure that students are using phones for the right purpose. It is impossible for teachers to examine every student because each teaching period lasts 45 minutes only.

Sharing the same view, Tran Trung Hieu, a teacher at Phan Boi Chau High School for the Gifted, said it would be chaotic if teachers cannot control students during the lessons.

Hoang Cong Vieng, a teacher at Ha Tinh High School for the Gifted, also warned that many students would use mobile phones for their private business. Therefore, it would be better to allow students to use phones when discussing certain issues, or during online tests, not during lesson hours.

Meanwhile, other teachers said there was no need to worry about the students’ use of smartphones at school.

Nguyen Quang Tung, headmaster of Lomonosov School in Hanoi, said his students have been allowed to use phones for many years, and things have been going smoothly.

Previously, parents only bought smartphones for their children when they entered high school. But now, primary school students also have smartphones.

Students in the central city of Da Nang has returned to school as the Covid-19 outbreak has been brought under control.

To minimize the number of school accidents, there must be a reasonable framework with strict and clear discipline, and if necessary, cases must be brought to court for criminal proceedings, experts say.

icon
E-cigarettes must be banned in Vietnam: policymakers
icon0