Truong Thi Mai, Politburo member and Chairwoman of the Party Central Committee’s Commission for Mass Mobilisation, has stressed the need to stabilise livelihoods of people in the central province of Quang Tri, who have suffered huge damage from storm Molave. 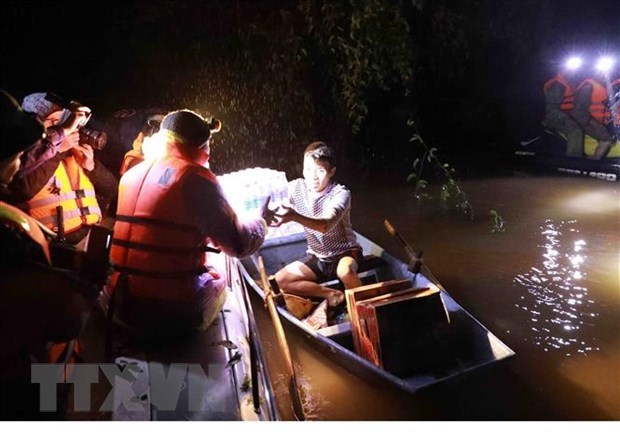 Visiting the province on November 1, the Party official spoke highly of the locality’s efforts to respond to the storm, saying the State has carried out many support policies for flood-hit provinces to ensure that they will overcome consequences of the storm in a timely manner.

She also ordered the local authorities and people to outline rational response plans to mitigate losses of life and property since the storm season is going on in the central region.
On the occasion, Mai presented gifts to 100 local families who were hardest hit by recent floods.

The same day, Chairwoman of the Vietnam Red Cross Society Nguyen Thi Xuan Thu presented 100 relief gifts, each worth 1 million VND, to residents in neighbouring Thua Thien-Hue province, which was critically battered by the storm.

She expressed her hope that the local authorities will continue efforts to help flood-hit people stabilise their lives and production soon.

While in Quang Ngai province, the “warm house” programme was carried out by the provincial youth union, provincial Party Committee’s Board for Mass Mobilisation, and the organising board of Miss Vietnam 2020 to support local people to weather the consequences of storm Molave.

Some 1.2 billion VND was presented to the province to repair houses for families having their accommodations collapsed in the storm.

Thirteen people were injured, 325 houses were damaged, and over 140,000 houses having their roofs blown away due to the impacts of Molave.

Storm Molave, which hit central Vietnam on Wednesday, blew the roofs off or damaged 84,600 houses in the central provinces of Thua Thien-Hue, Quang Nam, Quang Ngai and Da Nang City, and left 24 people injured and two others missing.