The PM made the statement while receiving 203 role models in mass mobilisation from localities across the nation on October 10. The youngest is 26 years old, while the oldest is 78.

Prime Minister Nguyen Xuan Phuc has highlighted the important role of mass mobilisation and the contributions of role models in the “Effective Mass Mobilisation” movement in the country's achievements, especially in the fight against COVID-19 pandemic, making Vietnam a bright spot in the field. 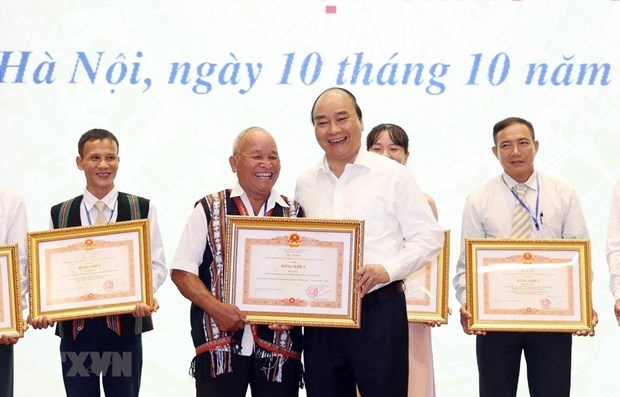 He said that the role models are mirrors in turning mass mobilisation into a practical and efficient revolutionary movement, helping strengthen social consensus by getting the people understand and trust in the revolution.

He held that mass mobilisation in the current period is a tough work due to the destructive scheme of hostile forces as well as wrongful information spread in social networks.

He stressed that administrative officials need to show strong performance in mass mobilisation by becoming a good example through performing effective services for the people.

Mass mobilisation is not only the responsibility of the Mobilisation Commission but the whole political system, he said, expressing hope that the role models will continue to supervise the performance of heads of the People’s Committee, villages, Party cells and organisations in responding to people’s aspiration.

He also underlined the need to renovate mass mobilisation methods for higher efficiency.

The “Effective Mass Mobilisation” movement was launched in 2009. Over the past decade, more than 900,000 role models have been honoured in various fields.

According to head of the Party Central Committee’s Mass Mobilisation Commission Truong Thi Mai, compared to 85 delegates in the first reception of the PM with the role models in 2015, this year, the number of the delegates increased significantly.

At the reception, the PM presented the certificates of merit to collectives and individuals who showed outstanding performance in mass mobilisation.

Prime Minister Nguyen Xuan Phuc on April 13 ordered the serious continuation of the implementation of Directive No.16 and anti-COVID-19 strategy to mitigate the risk of infection in the community.