Prime Minister Nguyen Xuan Phuc on Saturday underlined the urgent need to get life back to normal for people in flood-hit areas in the central region.

During his working trip to Quang Binh Province, the worst flooded area in the central region, PM Phuc called for support for people affected by natural disasters to quickly overcome the consequences of the floods. 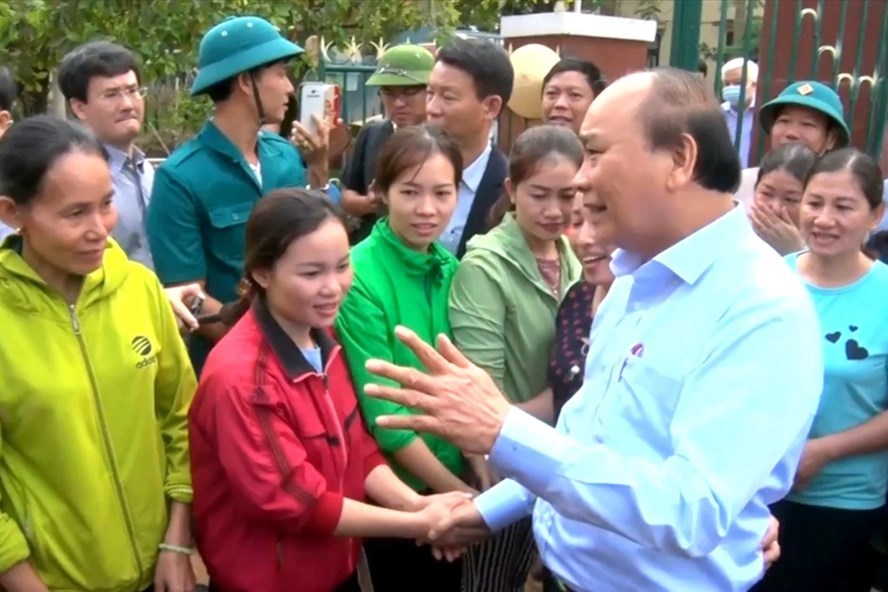 The Government has sent many missions to the central region to work with regional localities to tackle the consequences of floods and provide essential goods and medicines to residents, and necessary rescue equipment, he said.

He praised rescue forces and authorities for taking timely actions in their work and ensuring traffic progress in the locality.

The PM sent his regards and the sentiments of leaders of the Party and State to the people and soldiers in the region, expressing his wish that the authorities and people of central localities will soon overcome the consequences of the natural disaster.

The Government leader asked ministries, sectors and agencies to strengthen co-ordination with and support for the central provinces in responding to natural disasters.

He underlined the need to increase the awareness and understanding of local authorities, people and businesses about natural disasters, especially issues related to climate change.

It is urgently necessary to strengthen disaster forecasting capacity, especially expanding the use of forecasting technology, and international co-operation in this work, he noted.

He asked ministries and central sectors to define responsibilities to support flooded localities in production, agriculture and health and education.

The PM also mentioned the need to develop hydropower plants, saying the work must be implemented to ensure safety.

Affirming that the Government will add more resources to the central provinces to overcome the consequences of natural disasters, PM Phúc assigned the Ministry of Finance to revise decrees concerning humanitarian aid and donations, towards facilitating funding activities.

He directed all sectors and localities to create favourable conditions for donors to go directly to flood-hit areas for their relief work.

The leader also reminded sectors and localities to focus on measures to deal with upcoming storms.

According to statistics from central localities, recent heavy rains and floods claimed 119 lives and left 21 others missing.

At least 84 dead, 38 missing in floods in central provinces

At least 84 people have died and 38 others remain missing in floods and landslides which have ravaged 10 provinces in the central and central highlands region over the last few days.

icon
Dispatch on transportation of residents to hometowns issued
icon0

icon
Not all HCM City migrants choose to leave, many hopeful about livelihood post-COVID
icon0