The Executive Committee of the Party Organisation of  Binh province on August 1 decided to discipline two Party members for their involvement in the national high school graduation exam cheating scandal last year.

With most votes from Party members in agreement, the Executive Committee of the Hoa Binh Party Organisation gave Cuu a warning. Investigations showed that Cuu, as a leader of the provincial exam steering committee, did not conduct proper inspections and supervision throughout different periods of the exam, especially while marking test papers.

Since then, as many as 65 candidates received higher marks than their original ones causing serious consequences.

As many as seven workers of the provincial educational sector were temporarily detained for further investigation.

He also lacked supervision during the exam, especially during the marking of exam papers.

Doubts over the high school exam results in Hoa Binh were raised last year after the province announced that it had 27 students scoring nine points or higher in maths, accounting for 4.7 percent of the country.

Investigation showed that the exam results of 65 students had been raised. With a maximum score of ten, some students had their test scores raised by 0.2 to 9.25.

The police in Nam Tu Liem District, Hanoi, has discovered and seized many mini earbuds and cameras used for cheating in exams.

The Party Committee of northern Ha Giang province has taken disciplinary measures against some senior leaders for committing violations related to the exam cheating scandal in the province last year.

Exam cheating scandal: how much did one score adjustment cost?

Some defendants in the exam cheating scandal said that VND1 billion was paid for each ‘exam score fabrication’. 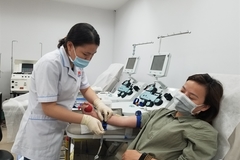