While waiting for approval of special mechanisms for the development, the municipal authorities will hand over the highest authority to Thu Duc City to solve its issues and problems promptly 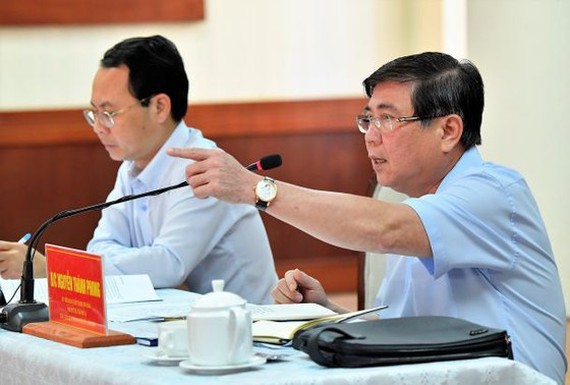 While waiting for approval of special mechanisms for the development, the municipal authorities will hand over the highest authority to Thu Duc City to solve its issues and problems promptly, said Chairman of the HCMC People’s Committee, Nguyen Thanh Phong at a working session to approve the implementation of the new city’s key tasks in 2021 on March 27.

The city’s leader allowed the Thu Duc City People’s Committee to use the proceeds from public property auctions to invest in its infrastructure investment.

Thu Duc City’s most important project is the establishment of the Department of Science & Technology and a digital transformation working team, he added.

Regarding to the new city’s proposal on the State budget collection target of over VND8, 300 billion (US$358.2 million), chairman Nguyen Thanh Phong said that Thu Duc has enough capacity to reach more than VND10,000 billion (US$431.6 million) and should make every effort to overcome the District 1’s achievement of VND19,000 (US$820 million)

About the models of growth and development, he made a suggestion on service and industry. The High Tech Park, Thu Duc City-Quang Trung Software Park and Institute for Innovation and Creativity will be set to become the “Silicon Valley”in Vietnam.

In addition, the chairman stressed that Thu Duc City must creat good conditions for businesses’ development and investment, and driving force for scientists to study and commercialize their reseach works.

He asked the new city to cooperate with relevant deparrtments to solve existing problems, such as issues of the Thu Thiem new urban area and the High Tech Park; complete its detailed planning in the third quarter; improve administrative procedures; enhance quality of life and living standards of residents.

Speaking at the meeting, chairman of the People’s Committee of Thu Duc City Hoang Tung said that the city has set 26 economic growth goals, including gaining the State budget collection target of over VND8, 300 billion, completing 15 projects and kicking off 16 others.

He has proposed the HCMC government to allow the Thu Duc to organize auctions of public property auctions, including 29 locations covering on an total area of 21,520 square meters, and use an estimanted proceeds of about VND1, 000 billion (US$43.1 million) from the sales and auctions to invest in infrastructures, implement compensation and site clearance, create land resources to call for investment.

Sercreaty of the Party Committee of Thu Duc City, Nguyen Van Hieu noted that the new city has been especially interested in planning, management of planning, developing infrastructure and caring for residents.

Thu Duc needs a special mechanisms and jurisdiction for its development as well as State budget collection target of VND10, 000 billion. If the city has not been given an suitable mechanisms, the authority could not solve current obstacles and cope with work overload, he stressed.

The HCM City People's Committee has proposed developing a regional and international financial center project in the city.