The residents in Thanh Xuan Ward, District 12, HCM City have been harassed by a group of some 10 monkeys that often destroy and loot their houses. 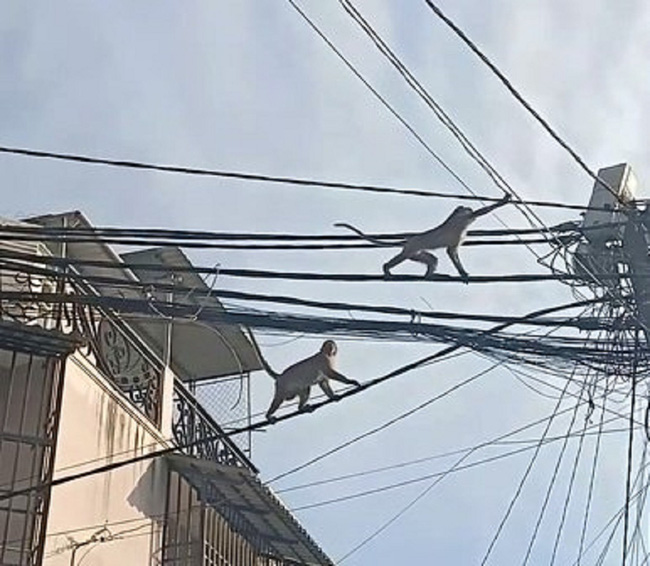 According to the locals, two monkeys escaped from a local house years ago. They then started breeding and formed a monkey group near a local canal. When the local authorities dredged the canal and built the embankments, the trees along the canals were also destroyed. The monkeys that live on the trees then went into the city to find food.

The monkeys often come in the early morning or the afternoon. They jumped from house to house when they were chased, destroying flower pots, offering trays and other items in the process.

A local man had to buy metal wires to protect the trees from being destroyed by the monkeys. Some other residents placed traps and reported the situation to the authorities to find the most suitable solution.

Tran Huu Hoi, representative of the Residential Cluster 6 in Thanh Xuan Ward, confirmed that they had been harassed by the monkeys, however, no one has been attacked by them yet.

They have reported the case to the District 12 People's Committee, HCM City Forest Protection Department and other agencies. Inspectors have visited their areas but nothing has been done to deal with the monkeys. Dtinews/Dan Viet

Hundreds of monkeys from the Son Tra Peninsula in Danang City have recently flocked into the city to seek food.

150 monkeys at Tay Ninh holy see proposed to be released

The proposal to release around 150 monkeys at Cao Dai Holy See in the southern central province of Tay Ninh into the wild has been sent to provincial authorities.