A woman in Hanoi has been rescuing hundreds of abandoned cats for the past 20 years. 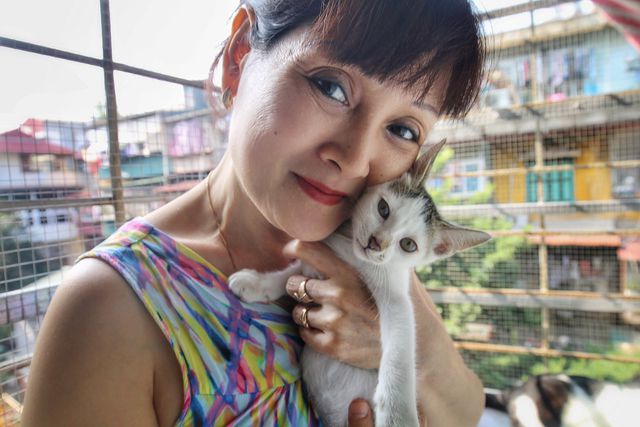 Nguyen Thuy Hai holds a cat that she rescues

Hai said that she has developed a special love for cats since she was small and watched her grandmother take care of nearly ten cats at her home.

"Since then I've always considered cats good friends," Hai said. "But I started keeping this big family some 17 years ago after seeing some abandoned, injured or ill-treated cats."

Hai remembered seeing some abandoned cats hanging around some dust bins near her home and started bring food for them.

"They were scared of people and so it was difficult to reach them," she said. "So I brought foods to them regularly. And as people saw my work, they started informing me when knowing about a cat in need."

Hai shared that one of the most memorable cases was in 2009 when she was informed about a pregnant cat being in critical condition after having her legs cut and being thrown out to Lang Ha Street.

"My son and I rushed to the scene and brought her home," she recalled. "With experiences in treating ill cats, we saved her. And the time seeing her successfully give birth to two healthy kittens, I thought that I need to try more to save more cats that need help."

Hai has saved hundreds of cats like that. With those that get lost, she try to find their owners. Those injured will be treated and those abandoned will be helped find new owners. If no one wants to take them, she keeps them all.

Some injured and ill cats

Hai said that she used to sleep with the cats in her 30-square-metre apartment. But as she welcomed more, she had to design separate areas for them based on their condition.

With 38 cats at the moment, she has to use all corners in the apartment to arrange cages, food, cushions and medicine. The small balcony is also designed for the cats to play and sunbath.

"Since my son got married and moved out three years ago, I have more room for the cats," she said.

Hai and the cats at the balcony

Hai is not only sharing her home with the cats, she has also devoted all her time and money to them. She has not been able to arrange a holiday for herself over the past 20 years as the cats need her care every day.

"I'm spending about VND10 million (USD435) for the cats, mostly on food and medicines," she said. "That's nearly all my income from running an online games shop."

But she's happy with her current life with her cats which she calls babies and gives them beautiful names.

"I will continue saving cats in need until my health won't allow me," she said. Dtinews

Animal protection to be taught in school

Around eight million primary pupils will be taught about wild animal protection at schools in 2019-2020 school year.