Hanoi authorities have prepared scenarios to promote socioeconomic development after the COVID-19 pandemic is brought under control.

The first scenario envisions an early containment of the pandemic, the city’s economy will regain its growth pace in Q2 and accelerate in the last two quarters, resulting in a growth rate of 7.5 percent for the entire year and fulfilling the set target.

In the second scenario, the pandemic is put under control in the third quarter, but economic growth continues to be affected, resulting in a growth rate of 6.42 percent for the year, not meeting the target for this year.

In the third scenario, the pandemic continues to the end of the year and the year’s growth is projected at only 5.34 percent (the forecast growth rate for the country is 5 percent).

Director of the city’s Department of Planning and Investment Nguyen Manh Quyen said policies to support enterprises, especially those that are newly-established, and promote production and business activities in the city are being widely implemented, contributing to fostering socio-economic development and containing the outbreak of the virus.

Solutions primarily focus on maintaining and restoring production in industries of potential, including the production of items serving COVID-19 prevention and control efforts such as medical equipment, face masks, cleaning chemicals and disinfectants, ventilators, testing kits, and pharmaceuticals.

At the same time, the city has given due regard to boosting agricultural production, information and communications, e-commerce, e-payments, and online education.

Apart from measures to remove obstacles facing local enterprises and ensure social security, the capital has also accelerated administrative reform through promoting the application of IT and expanding online public services.

Credit institutions in the city have launched preferential credit programmes and applied flexible interest rate policies to make it easier for businesses to access capital for production and business amid the pandemic.

Preferential mechanisms and policies have also been applied to help enterprises invest in research and technological innovation.

In particular, the capital has introduced a scheme to support startups to 2020 and another to support innovation and startups in the 2019-2025 period.

Hanoi authorities have been identifying and introducing solutions to address pressing difficulties facing production and business and ensure social security amid the COVID-19 pandemic, the 23rd meeting of the 16th Hanoi Party Committee heard on April 22.

Participants discussed key issues relating to the city’s socioeconomic development plan in the remaining months of 2020, COVID-19 prevention efforts, preparations for the 17th Congress of the Hanoi Party organisation, personnel activities, and planning for smart city and metro projects.

According to Vice Chairman of the Hanoi People’s Committee Nguyen Van Suu, the pandemic has had a severe impact on all aspects of society and the city’s major socioeconomic goals in particular.

Economic growth in the first quarter was much lower year-on-year, presenting problems in yearly socioeconomic development objectives being reached.

The capital recorded a rise of 36 percent in the number of businesses ceasing operations in the first quarter and the number of people applying for unemployment insurance benefit rose 22.2 percent. The CPI was higher than in the same period of 2019, especially for food.

Construction continued to slow, affecting the disbursement and efficiency of investment capital.

Secretary of the Hanoi Party Committee Vuong Dinh Hue urged city authorities to do better in the fight against COVID-19, while emphasising the importance of adopting appropriate measures in the future to recover and promote economic development.

Director of the Hanoi Department of Planning and Investment Nguyen Manh Quyen touched on obstacles relating to site clearance and capital disbursement in public investment projects.

Director of the Hanoi Department of Industry and Trade Le Hong Thang, meanwhile, flagged difficulties in promoting exports in the second quarter as major trading partners like Europe, the US, and Japan are also facing difficulties from the epidemic.

He underlined the need to focus on developing the domestic market and creating the most favourable conditions possible for local enterprises to recover production and business.

Director of the Hanoi Department of Taxation Mai Son said that along with deploying the Government’s support packages it has accelerated administrative reform efforts and provided support to enterprises to help them tackle any and all difficulties.

It has also set out a specific scenario to offset revenue losses and complete its budget collection tasks in 2020, he said.

A project on the development of urban government is now being piloted in the capital. 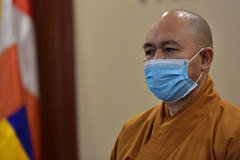