Government programme encourages marriage before the age of 30

Prime Minister Nguyen Xuan Phuc has approved a birth rate adjustment programme towards 2030 which encourages people to get married before the age of 30 and women to give birth to the second child before they get 35 years old.

Watch our video on people's opinions on the Government's programme

Provinces and cities in which each woman of reproductive age has two to 2.2 children should maintain the rate or so-called desired fertility at replacement level.

The targets aim to help Việt Nam accomplish the national population strategy by 2030. 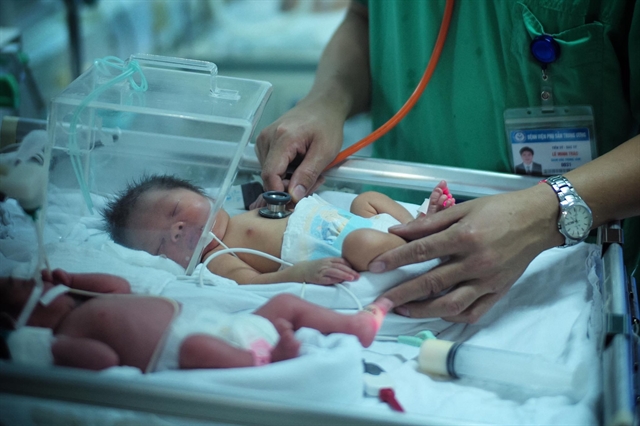 Newborns at the National Hospital of Obstetrics and Gynecology. The Government has asked local authorities to pilot policies to support couples to give birth and raise children.

The PM ordered the issuance of regulations so that public employees and Party members set the example of having no more than two children in their families.

Areas with a low birth rate or desired fertility at replacement level should encourage families to have two children.

PM Phuc asked local authorities to pilot policies to support couples in giving birth and raising children. Getting married or giving birth at an old age is not encouraged.

Couples who have two children will have their income tax reduced and be assisted with children’s tuition fees or expenses to rent houses or buy social housing. Children of these families will have priority to be admitted to public schools.

Local authorities have been asked to pilot marriage and family consultation services such as friend-making clubs and pre-marriage health consultations.

Pregnant women or those having two children have access to mother and baby healthcare and malnutrition prevention consultations. — VNS

National population database to be completed next year

The national population database will be completed by April next year to improve State management of citizens, according to the Ministry of Public Security.

A new programme dealing with gender-biased sex selection and harmful practices in Vietnam will be carried out from 2020 to 2022, the UN Population Fund and the Norwegian Government announced on April 10.