The authorities in Bien Hoa City, Dong Nai Province have asked Pham Boi Chau Primary School to explain an incident where several pupils fell off a school bus while it was turning a street corner. 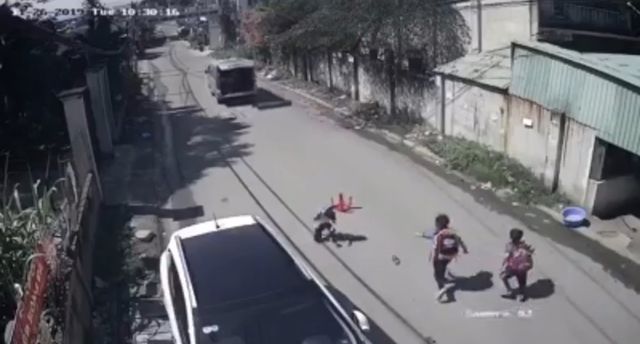 Bien Hoa City Department of Education and Training confirmed on November 27 that they ordered the school to provide a report on the case which occurred on November 26.

According to the department, this was a serious incident and they would investigate the cause in order to have a suitable punishment and solution.

Many parents were surprised and scared after seeing a video clip posted on the internet. In the clip, a school bus, a Mercedes-Benz MB100, was turning a corner at 10.30 am when the back door suddenly sprang opened and three pupils fell onto the street.

The pupils were sitting on small plastic tools and were unharmed. It is suspected that the door wasn't locked carefully or the lock may have been broken.

The driver was unaware of the incident and kept on running as the pupils got up and run behind the minibus. Luckily, the street was empty at the time.

The original owner of the minibus said he had sold it to a customer in Dong Nai Province years ago. Dtinews

How much money do elite schools in Vietnam need to produce talented students?

VinUni stunned the public when announcing the sky-high training costs of $35,000 a year for university education and $40,000 a year for post-graduate studies.

The Indian girl was enrolled in school after a photo of her peeking into a classroom sparked outcry.