Despite ban, Vietnamese children are taught to read and write before going to school

The Ministry of Education and Training (MOET) prohibits schools from teaching children to read and write before they enter the first grade. However, parents have ignored the request.

Hoang Thi Duong, whose daughter enters the first grade this September, admitted that her daughter began learning to read and write in April. 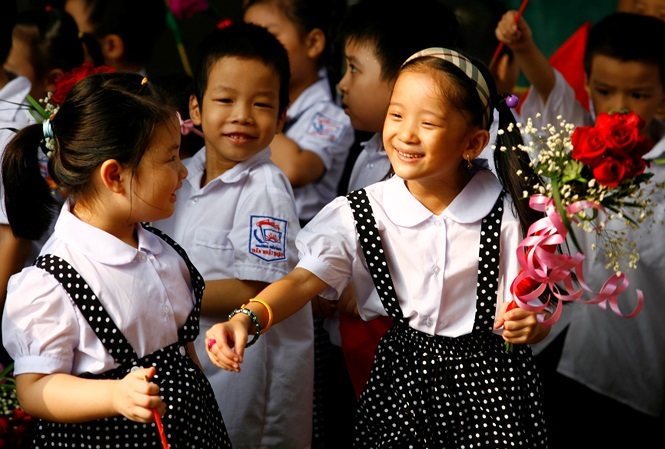 “I sent her (the daughter) to a class opened by a primary school teacher. In the class, about 10 children are taught to read and write. My daughter can read very well, though the new academic year will only begin in some days,” Duong said.

Asked if she heard about education experts’ advice not to teach children to read and write before a certain age, Duong said she heard about the ban by the education ministry, but thinks it would be better to teach her child in advance.

“Some parents told me that if my daughter doesn’t learn to read and write before entering the first grade, she will lag behind classmates,” she said.

Tran Phuong Anh, a parent in Hanoi, said she regrets not sending her son to an extra class in the summer holiday.

“At the first meeting with students before the new academic year opening day, the teacher asked students who can read and write and nearly all students raised their hands. Only some students burst into crying and said that they still cannot,” Anh said.

In the class, the students who wrote well receive paper flower gifts from teachers. Anh’s daughter complained that she never received flowers and she feels sad about this.

Anh, who is an office worker and has a bachelor’s degree, said she agrees with the theory that parents should not force children to begin studying too soon, but she understands why other parents act this way.

“If your child lags behind other classmates, he will be sneered at by his friends and he will be shy and be afraid of going to school,” Anh said. “This will seriously affect children’s psychology. If so, school will be a nightmare for them. ”

Many schools respect the request by MOET and do not teach students to read and write in advance.

Nguyen Thi Thanh Huyen, a teacher at Chu Van An Primary School, said if students can read and write before entering the first grade, they will lose passion for learning and will not enjoy going to school.

At Kim Lien School, students spent two weeks before the new academic year to become familiar with the school. At Chu Van An School, students learned how to escape in emergencies and what to do when they get lost.

Many universities have enrolled students for general education, stirring a debate about whether this is legal.

A lack of physical activity and inappropriate diets are to blame for the high rate of obesity among primary school students, according to a new study by the National Institute of Nutrition.