A large area of a forest in the Central Highlands province of Gia Lai has been destroyed for months, but local authorities have claimed that they knew nothing about the incident.

Many trees, including ancient ones, have been logged in the forest located at Ia Ba Commune, Ia Grai District. The area in which the illegal logging has occurred is around 10 kilometres from the Ia Ba Commune People’s Committee. 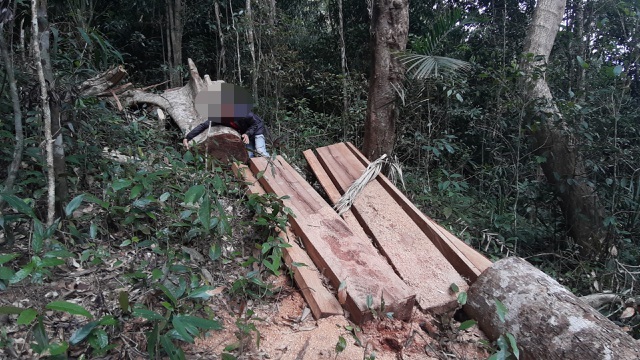 Many trees have been logged in the forest located at Ia Ba Commune, Ia Grai District

Just around 100 metres from the only road to the forest, it is easy to see dozens of trees felled. Going deeper into the core of the forest is the scene of lumberjacks’ vehicle traces with tree limbs scattered; while their valuable trunks had been smuggled elsewhere by loggers.

Most of the trees with the diameters of between 60cm and one metre were the lumberjacks’ target. However, some big old trees which have a diameter of up to nearly one metre are still there. It is possible that loggers did not have time to take them away due to the recent bad weather.

In just half a day, Dantri/DTiNews reporters found illegal logging in the forest at four spots. The reporters contacted Ia Grai District’s forest ranger force for further information. However, Lam Van Long, head of the unit, said that he did not know anything about the incident, noting that he would cooperate with other concerned agencies for the inspection.

Le Ngoc Quy, chairman of Ia Grai District said that he instructed the inspection over the deforestation. Any violator will be strictly punished. He also emphasised that the responsibilities of local forest rangers must be clearly defined.

Police in Dak Lak Province are investigating the forest destruction problem in the area.