Coastal road to be built in Thanh Hoa Province

A new coastal road will be built between Hoang Hoa-Sam Son and Quang Xuong-Tinh Gia in the central province of Thanh Hoa under a public-private partnership.

The project, approved by Deputy Prime Minister Trinh Dinh Dung, will cost VND3.4 trillion (US$145.9 million), of which VND1.4 trillion ($60.1 million) will come from the State budget.

The Thanh Hoa Province will contribute VND980 billion ($42.1 million) and the remaining funds of more than VND1 trillion ($43.8 million) will come from investors.

The project will be conducted under a build-operate-transfer (BOT) contract and will be 29.5km long.

The second part from Quang Xuong-Tinh Gia is 17.2km. It starts at the Nghi Son Economic Zone and ends in Ninh Hai Commune, Tinh Gia District.

Investors will set up tollbooths to pay back the capital based on present laws.

The estimated time for collecting road use fees to recover capital is 24 years and two months – from 2023 to 2047. Official time will be defined via bidding to select investors following present laws.  VNS

Associate professor Tran Dinh Thien, former director of the Central Institute for Economic Management and member of the consultancy team for developing the central coastal area, talks to Investment newspaper about economic development of the area.

An international deepwater container port was put into operation at Nghi Son International Port in the north central province of Thanh Hoa on Wednesday. 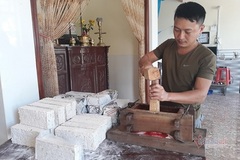