Classes to teach, designs to create

Along with a passion for teaching and a love of children, an ethnic Ba Na teacher in the Central Highlands province of Gia Lai has another enduring interest: fashion design. 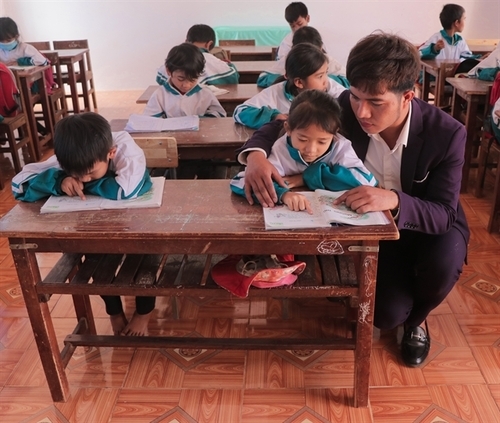 The teacher has come up with eye-catching brocade designs for wedding and graduation dresses in recent years that have become popular among a large number of young Ba Na people.

His unique creations are inspired by traditional outfits and help not only improve young people’s awareness of their ethnicity, but also boost the preservation of their traditions.

Tuih says each ethnic group boasts its own outfits. In order to make them suitable to people’s present tastes, especially young people, he came up with the idea of combining brocade and different styles to make modernised designs.

“I always try to make my designs feature both traditional and modern characteristics,” he says. “This is the best way to promote Ba Na culture and customs, through traditional imagery and brocade motifs.”

Away from teaching, he spends holidays and summer vacations photographing fashion models.

Tuih sometimes works as a model himself during his shoots, or asks other photographers and designers to help when he’s working on a new idea.

Most of his wedding and graduation dresses are made from brocade weaved by his mother and sister.

“I often ask them to hand-weave fabric and I then design dresses based on what they do,” he explains. “I also ask a tailor to innovate new clothes to make them more eye-catching.”

He has taken hundreds of photos since last year of weddings where the bride is wearing one of his designs, or where a young model is dressed in a brocade outfit he created.

His reputation as a modern fashion designer has spread far and wide among Ba Na communities in the Central Highlands.

Garment companies began to notice him and some wanted to sign him up, but according to Tuih, he hasn’t really thought about expanding his business just yet.

Dinh Thi My Giang in Kbang District says that she and her friends like Tuih’s dresses.

“Wearing them retains our cultural identity,” she says. “His designs are very much welcomed by young Ba Na people. Many of us rent them out to take photos at wedding anniversaries or just for fun.”

Tuih also knows how to weave tribal fabrics and play gongs and takes part in local cultural and artistic pursuits.

He is also a conscientious teacher who has helped many kids learn how to read and write in his classes.

His first teaching job was at the Ia Bang Primary School in Dak Doa District, just after he graduated from university several years ago.

He remains dedicated to the job and loves his students.

Ayam, a parent of one of his young charges, says the family couldn’t teach their son very much before he came to school and he was unable to read or write.

“He just stayed at home with his grandmother, so no one tutored him or helped him study,” Ayam says.

“He didn’t know the alphabet until he went to class. Teacher Tuih often visited our house in the evening to help my son, and by the end of the first semester he was able to read and write and became known as a good student.”

Tuih speaks of the difficulties he faces when teaching, saying that simply getting children into the classroom is one of the biggest challenges for all teachers in minority regions when the new school year begins.

The school year, he explains, starts in the middle of the wet season in the Central Highlands, so student numbers early on can be quite low.

While many parents are wary of sending their kids out to school in such conditions, others prefer they work in the fields or around the home, according to Tuih.

“On the eve of each new school year, we, the teachers, visit every house with children of school age to convince the parents to let them come to school,” he says.

“It takes time but we do it because we know it could influence the parents to let their children come to classes, while the school can maintain its annual enrolments.”

On days it rains heavily and no vehicle can travel along the local roads, he and other teachers get ready to bring students to school on foot where possible.

He also spends a lot of time helping struggling students catch up, by giving them extra classes.

As has been the case since he first started teaching, all of his Grade 2 students in the 2020-21 school year grew their knowledge and passed the final exam.

Ha My Yoga was founded by yoga teacher Le Ha My and specialises in teaching beginners the basics of the spiritual discipline and how to avoid injuries in those less-than-limber early days.