Will the sand in the Red River be depleted in 100 years?

Ninety percent of sediment is trapped in Chinese and Vietnamese reservoirs, which will lead to erosion, according to Mai Van Bieu, an underground-work expert.

Speaking at a recent seminar on the safety of terraced hydropower systems on the Da River, he said: "Ninety percent of alluvium has been retained by hydropower reservoirs. We cannot expect anything from the remaining 10 percent, because they are just suspended particles." 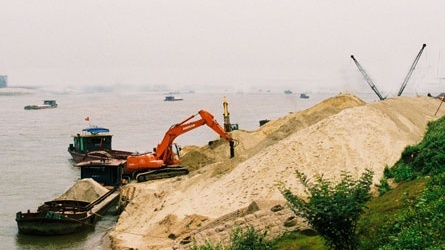 “This will lead to serious erosion in the Red River lower course. In the Mekong River Delta, the phenomenon is also occurring."

According to Pham Dinh Hoa from the Vietnam Academy for Water Resources, the deep erosion began occurring in early 2000. As of 2012, the area of the cross section of the main stream had increased by 40 percent compared with 2000.

This has lowered the river water level. Since 2000, the river bottom has dropped by 8 cm every year.

The main riverbed has eroded by 2 meters, causing the water level to fall. The water volume flowing to the Duong River has also changed, because the Duong River bed has become lower than the Red River, which is attributed to sand overexploitation.

Within 15 years, from 1997 to 2012, nearly 244 cubic meters of sand were lost from the Red River bed. The amount of sand taken away in Hanoi alone was three times more than the amount of alluvium reaching Son Tay at times.

The bottom of the river has dropped and landslides have begun occurring on the river banks.

Scientists warned that if no measure to protect the Red River is applied, the consequences will be serious.

Natural sand remains an irreplaceable material used in construction. According to the Ministry of Construction, the amount of sand to be exploited can satisfy only 60-65 percent of the demand in large cities.

Vietnam has been developing many infrastructure projects, so the demand for sand has been increasing rapidly. With the current development pace, experts believe that sand supply will be exhausted in 15 years.

According to Tran Ba Viet, a senior expert at the Institute of Construction Technology, artificial sand from ground stone is increasingly popular.

This type of sand is mostly used in concrete production and cannot replace fine sand and medium-grain sand in other construction stages.

The World Wildlife Fund (WWF) and Mekong River Commission (MRC) say the river bed of Mekong’s two main tributaries in Mekong Delta fell by 1.4 meters in 1998-2008 due to sand overexploitation.

Hanoi military personnel salvaged and safely disposed of a US-made unexploded 1.6m-long bomb from the Red River on Monday.