Only a small proportion of construction works in Vietnam can obtain certificates for green real estate, but the demand is increasing rapidly in the context of climate change.

A real estate project in Bac Tu Liem district in Hanoi has been granted an EDGE certificate by IFC belonging to the World Bank Group. 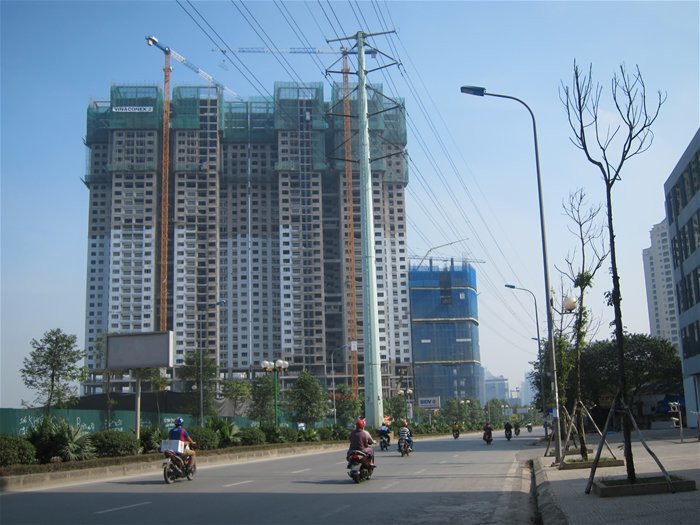 According to the investor, the project can save 25 percent of energy and 36 percent of water. The landscape is also designed in a green way that helps reduce the urban heat island.

This is one of very few projects which went through the examination to be granted the green certificate.

According to the Ministry of Construction (MOC), Vietnam has 87 construction works meeting green certificates. Of these, 13 works have m EDGE, 53 LEED and 21 LOTUS.

Meanwhile, a report of CBRE Vietnam showed that by December 2018, Vietnam had had only 104 construction works, or several percent of total works, granted with green certificates, a modest figure compared with the strong development of the construction market. The figure is much lower than the 37 percent in Singapore.

The low percentage of construction works in Vietnam is attributed to the high investment rate and strict requirements. To obtain LEED, LOTOS and EDGE, investors have to prove that their projects have lower energy and power consumption levels.

To obtain EDGE, for example, the energy consumption of the project must be at least equal to 20 percent of a typical project according to IFC standards.

Experts believe that developing green environmentally friendly real estate will be a continuing trend in the future in the context of climate change having a bigger impact on Vietnam. The increasingly high demand for green real estate and the willingness to pay more for convenient and smarter living space will accelerate the development of the market.

World Green Building Trends 2018, a report from Dodge Data & Analytics, shows optimistic predictions about the development of green construction works in Vietnam. Such works now account for 13 percent of total works at this moment, but the figure is expected to double to 24 percent by 2021.

According to the report, Vietnam has the highest growth rate of green apartment construction works by 2021, 61 percent, higher than the world’s average growth rate of 30 percent and Singapore’s 25 percent.

Vietnam’s interest in green buildings is 28 percent, higher than the global average level, just lower than India, China, South Africa and the US.

The loopholes in urban development programming are behind the decline of greenery area in large cities, depriving urbanites of the right to a 'green life' .

Driftwood, broken fishing nets or flip-flops may be rubbish to many people, but through the skilful hands of Ho Cong Thang, who resides in An Bang Village in Hoi An, this detritus is transformed into unique objects.