The Vietnam Academy of Agriculture, following encouraging results from its experimental vaccine against African swine fever, is continuing studies to produce a vaccine.

There is still no commercial vaccine against the disease in the world, while the epidemic has affected many pig breeding farms in Vietnam. 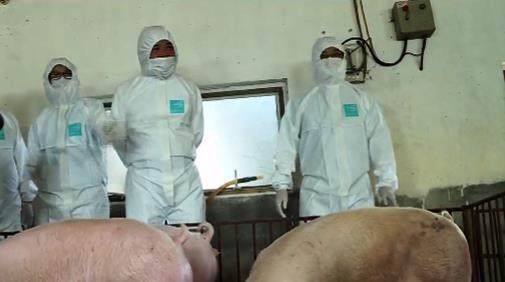 In Vietnam, ASF has been found in 61 cities/provinces, which have culled 2.8 million pigs, or 10 percent of total pigs. This is an unprecedented damage to Vietnam’s domestic livestock industry.

The academy was the first institute which found that African swine fever was the factor causing disease in pigs in Vietnam.

The academy has selected strains of pathogenic viruses to initially work on the production of preventive vaccines.

Scientists from the academy's Veterinary Department, led by Associate Professor Doctor Le Van Phan, have successfully produced a number of inactivated vaccines from the African DTL virus. The vaccines have been tested in pigs and shown encouraging results.

According to Nguyen Ba Hien from the Veterinary Department, researchers are working in highly favorable conditions. They have deep understanding and experience in producing quick test KIT and vaccines.

The academy has a modern biology laboratory with advanced equipment that can be used to carry out study on tissues in molecular biology and virology and vaccine production.

However, they still don’t have a biosafety laboratory level III to conduct important tests when studying microorganisms. Funding cannot be provided in time to conduct experiments when necessary.

The biggest problem is that African swine fever has been spreading very quickly.

The scientists at the academy are conducting many different research methods. The most important factor in vaccine commercial production is finding a suitable biological environment for visuses to live and multiply. Only when viruses can be multipled will scientists be able to produce a vaccine on a large scale.

Hien predicted that Vietnam would need at least two years to successfully produce the vaccine.

Outbreaks of African swine fever have been discovered in 62 provinces and cities across the country as of July 9 and 2.9 million pigs have been culled, a report says.

According to Minister of Agriculture and Rural Development Nguyen Xuan Cuong, NAVETCO National Veterinary JSC and Regional Animal Health Office No.6 (RAHO6) have jointly carried out several researches on vaccines.

The measures are on the right track and Cuong hopes Vietnam is likely to soon produce the vaccine.

African swine fever (ASF) has spread across 62 out of 63 provinces and centrally-run cities in the country, forcing the cull of more than 3.3 million pigs.

Outbreaks of African swine fever have been discovered in 62 provinces and cities across the nation as of July 9, forcing a total of 2.9 million pigs to be culled.