The proportion of Vietnamese enterprises that have not adopted digital transformation is about 1.5 times higher than the global average. 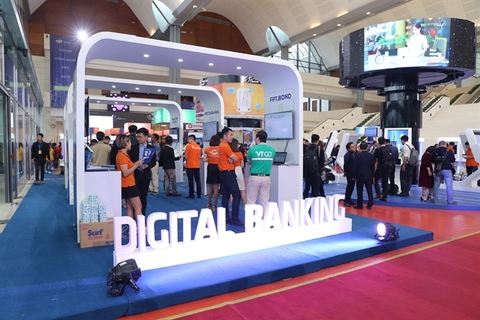 FPT Techday 2019 was held on Thursday in Hà Nội. — Photo courtesy of FPT

The biggest problem for businesses was that they did not know where to start the transformation, said Nguyen Van Khoa, FPT director general, speaking at the FPT Techday 2019.

He said if businesses failed to get moving, they would be left behind.

FPT Techday 2019 under the theme “Smart Start” was held on Thursday in Ha Noi.

The event attracted more than 3,000 attendees, including 500 senior leaders of large enterprises and banks, and technology experts.

“In order to effectively implement a digital transformation, FPT believes that it is necessary to think big, start smart, and increase scale quickly,” he said.

“The smart start is to identify and focus on the essentials for the business; select highly feasible projects, and select simple projects during the pilot process," he added.

"Our enterprise carried out its digital transformation with the motto “thinking big"", said Dinh Toan Thang, deputy head of the research and development board at the Viet Nam Post Corporation (VNPost).

VNPost was a State-owned enterprise that had been operating for over a century under an outdated labour structure, he said.

Realising core areas such as postage and retail had become more competitive thanks to the wave of fintech and e-banking, the board decided to adopt a digital transformation strategy based on foreign frameworks, putting new technologies and the Internet of Things (IoT) into operation, said Thang.

As a result, the company achieved revenue of US$1 billion last year, with profit pushing to $400 million.

Nguyen Anh Nguyen, deputy director general of information technology at Masan Group, said in order to develop, there was no other way but to change and improve.

For Masan, branding was the most important. “Brand means money,” he said.

The group had undergone three digital transformations since 2013, he said.

Nguyen Hung, director general of TPBank, said that a leader must be a digital leader in the digital era.

The bank has applied Industry 4.0 technology to nearly all its activities, including Big Data, biometrics and an open communication gateway.

Big Data had successfully helped the bank analyse customer behavior and store structured and unstructured data, he said. The technology had been applied by TPBank in behavior analysis to review and approve loans.

"Using this technology, we avoid the risk of fraud for our customers," he added.

“A smart start is very important to the banking industry”, he said.

"We have seen many benefits from this step. The digital experience is now part of TPBank," the director emphasised. — VNS