The system, invested in by university students in HCM City, allows patients to give yes/no answers, request help for going to the toilet, and call family members, all with eye movement.

A group of students from the HCM City Industry University, including Tran Dang Khoa and Tran Van Phuc, have designed a system which can help patients with Lock in Syndrome communicate with their eyes. 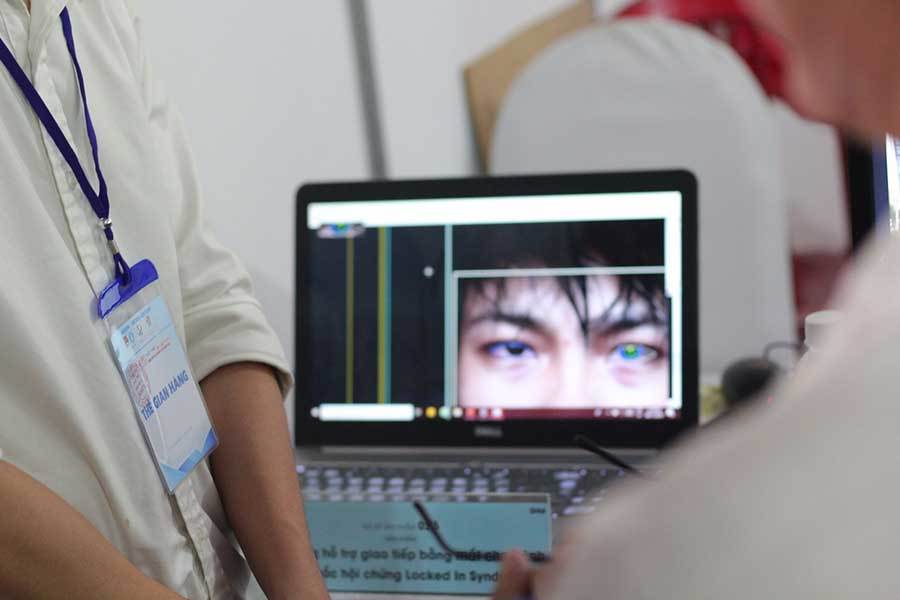 This syndrome is a neurological problem in which the body is paralyzed except for the eyes. These people are aware of their surroundings but they are "locked", unable to move any muscle of the body, just make eye movement. Their speaking ability is also compromised and their most effective way of communicating is through glances.

The students have entered the second phase of research – applying AI, which will diagnose patients’ health conditions, predict compatibility with the patients (room temperature, light suitable for patients), and predict the time to go to the toilet.

Dang Khoa, one of the inventors, said he learned about the patients in vegetative state and read a scientific article that proves that the people still have consciousness.

Khoa one day met two students whose mother was in a vegetative state and heard that the students dreamed of talking with the mother. He vowed to invent a system to help the students.

The system invented by Khoa and Phuc is compact and separate from users.

The system comprises an interface screen, the size of which will depend on the location for patient care and can be equal to the screen of a tablet or desktop computer.

Patients need to look at the screen and the camera will record and convert this into signals thanks to computer vision technology.

According to Khoa, the system could be helpful not only to patients suffering from Lock in Syndrome, but also to paralyzed patients who cannot speakand old people who have had a stroke and have limited communication ability. The system helps them call family members from locations far away to come promptly.

One of the biggest advantages of the system is that it is affordable.

In other countries, patients with the same problem have to wear a device using EMOTIV, a technology that measures band waves, priced at $1,000. The system invented by the students, if commercialized, would be 1/5 the price of that.

With the theme of food and agriculture technology for 2050, a robotics competition has encouraged students to put forward solutions to overcome food shortages that may occur in the future.