Smarthomes first appeared in Vietnam 10 years ago, but have only become popular recently. 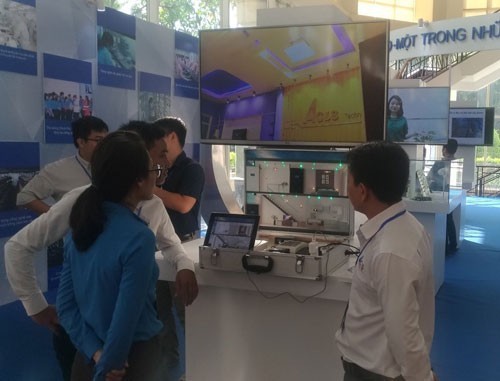 All the devices cost him less than VND10 million.

“Now I can turn on air conditioner before I get home, while the light will automatically turn on when I enter the door,” he said. “The cost is very reasonable."

Experts say the cost depends on the number of devices installed. They need to have internet, smartphone with wi-fi connection, bluetooth, 3G/4G and some other devices, including switches, smart sensors, bells and cameras at the cost of VND20-50 million.

According to Do Nguyen Thanh Dong, managing director of ACIS Technology, smarthomes are a new business field in Vietnam, but there are now50 brands, mostly foreign ones.

He complained that many Vietnamese businesses buy Chinese technologies and develop services in Vietnam, thus triggering a stiff competition in prices and distorting the market.

“Low-quality products, bad warranty and maintenance regimes, and bad customer care policy all have made many customers turn their back to smarthomes, which has affected the business of authentic enterprises,” he complained.

In previous years, his company saw the revenue growth rate of 100 percent per annum, while the growth rate was 50-60 percent only in 2018.

The prices are higher than prices offered by businesses using Chinese technologies.

Realtors now tend to develop smart urban areas in order to attract young customers who are ready to adapt to new things and high technologies.

At Golden Star residential quarter on Nguyen Thi Thap street in HCMC, residents some years ago began using a face recognition system to open and close their apartments.

A report of CBRE Vietnam showed that the house supply is increasing, so, if realtors want high prices for their products, they have to equip their projects with special services.

However, JLL commented that Vietnam’s smarthome technology is still in the early stage of development. Not many smarthomes meet standards.

In HCMC, devices for smarthomes are available at many shops which can be bought and installed easily. A Xiaomi Smarthome Kit is priced at VND1.3 million only, with five products.

The ICT reference framework for the development of smart cities (version 1.0) has been issued by the Ministry of Information and Communications as a basis for localities and businesses to develop smart city projects.

Hanoi should set up a connected technology system in order to build a smart city model, Deputy General Director of Gamuda Land Dennis Ng Teck Yow said on the sidelines of the Symposium on “ASEAN – Japan: Cooperation for Prosperity”.