A team of young people that has created a giant robot made of automobile scrap hopes to create a park to display the robots.

Luu Tuan Khanh, born in 1989, the leader of the team, said he has loved robots since childhood. Later, when working as a lecturer at the University of Economics and Industrial Engineering, he cherished the dream of making a robot. 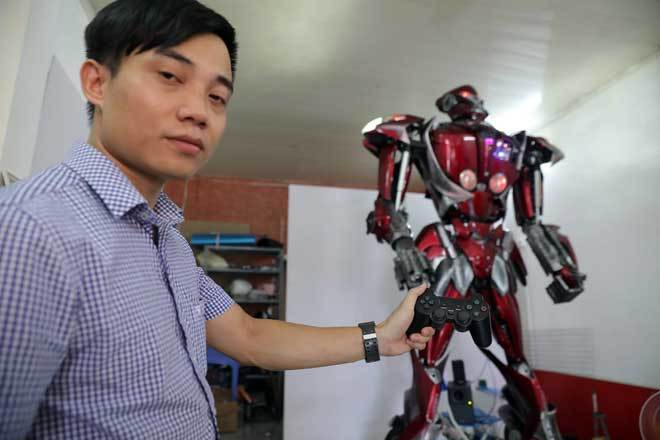 Khanh decided to resign from the post and create a new working environment for himself, where he can research and develop products to satisfy his passion for creativity. This was the time when Robot Bank, his project on creating robot, took shape.

When participating in Robocon programs, he asked himself why people simply followed the designs of robots manufactured by other countries. His knowledge about environmental pollution led the young man to come up with the idea of making a robot from recycled automobile and motorbike scrap. This would reduce waste and inspire people to protect the environment.

The project kicked off in 2019 when Khanh set up his team with members from the University of Economics and Industrial Engineering.

The members of the team had to work very hard to create the robot. They had to gather their strength to make robots and take other jobs to earn their living at the same time. Khanh said sometimes he had to work with computers from 7am to 6am the next morning to program the robot.

Robot One was created as a reward for their great effort. It is 100 kilogrames in weight, 3 meters tall and has arm span of up to two meters. It can rotate the upper body and is programmed to introduce itself.

“Hi everybody! I am Robot One. I am from Vietnam. I was designed and created by Robot Bank. I am the first version of the robot created from recycled scrap,” Robot One says after it is turned on.

The team had to spend a lot of time to collect materials from everywhere. There was a technical drawing for Robot One, but the assembly was a difficult task because the materials were scrap and did not fit each other. It took a lot of time to cut and whittle the pieces of scrap until they felt satisfactory.

After many months of hard work, the robot was completed in the 50 sq meter room used to contain materials and the 10 sq meter assembling yard.

The total cost of the original robot was VND200 million.

Aerogel, the super material, opens great opportunities for humans to solve problems, from waste treatment and environmental protection to the production of new materials.

The North Magnetic Pole has been racing across the top of the world, from Canada towards Siberia.