On April 22, 2003, the Government issued a decision approving the plan to thoroughly handle the facilities causing serious environmental pollution.

Only when tens of kilograms of mercury were released into the environment during a fire that destroyed a Rang Dong light bulb factory in a densely populated area of Hanoi did people suddenly remember the PM’s decision of 16 years ago that polluting factories must leave the inner city. 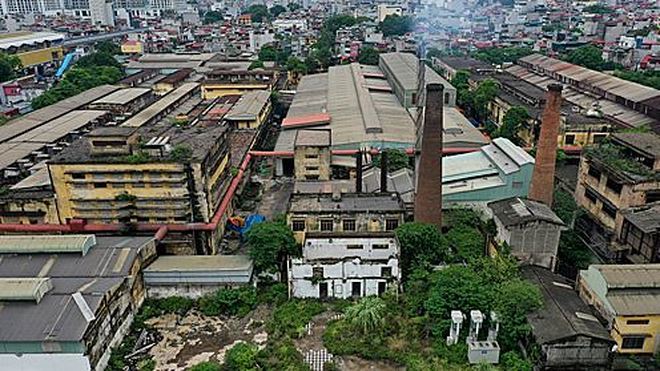 On April 22, 2003, the PM issued a decision approving the plan to thoroughly handle the facilities causing serious environmental pollution. Two months later, the Hanoi People’s Committee released a decision on relocating production workshops which pollute the environment out of the inner city.

However, 16 years later, the complex of rubber, tobacco, bulb and footwear factories remains in a densely populated area in the inner city. And days ago, a fire occurred at Rang Dong. Scientists estimated that 27 kilograms of mercury were spread in the environment.

Sao Vang Rubber JSC and Thang Long Tobacco Company all have factories here which are listed by the Hanoi Department of Natural Resources and the Environment as the most polluting facilities.

No considerable progress has been made since the decision on relocating the production facilities was released many years ago. The detailed plan on relocating Thang Long Tobacco factory (6.4 hectares) was approved nine years ago.

Under the plan, the company can use money to be collected from shifting the land use purposes to relocate the factory to Quoc Oai Industrial Zone and give allowances to workers laid off.

However, according to a representative of Thang Long Tobacco, the shifting of land use purposes has not been completed, so the company still doesn’t have money to start the relocation process.

Meanwhile, Sao Vang Rubber factory nearby is still operational, though the plan to relocate the factory to Ha Nam was approved 10 years ago.

In fact, relocation is discussed at every shareholders’ meeting. According to the senior executive of Sao Vang, the Vietnam Chemicals Group, which is holding the controlling stake in Sao Vang, has agreed on the relocation, but it is the Ministry of Industry and Trade (MOIT) which has jurisdiction to approve relocation plan.

Thuong Dinh Footwear is in the same situation. The decision on the factory relocation was approved in late 2010 but only in late July was the production termination approved from the Hanoi municipal authorities. The company wants to move as soon as possible because the current production cost in the premises is too high, especially land rent.

Many factories in the inner city still cannot move because of many reasons. These include the factories of the Cau Duong Construction and Mechanical Engineering JSC on Tran Quy Cap street of Dong Da district, Dong Xuan Knitting in Hai Ba Trung district and Hanoi Rubber in Nam Tu Liem.

Many studies in Hanoi have shown that heat inversion is one of the main causes for recent sharp rises in pollutants, according to the Ministry of Natural Resources and Environment (MoNRE).