For the first time in history, doctors in Vietnam have successfully carried out two bowel transplants from live donors, considered one of the most difficult organ transplant techniques.

With this success, Vietnam has become the 20th country in the world to perform such a complex surgery, director of the Military Hospital 103 Do Quyet said at a press briefing on Saturday. 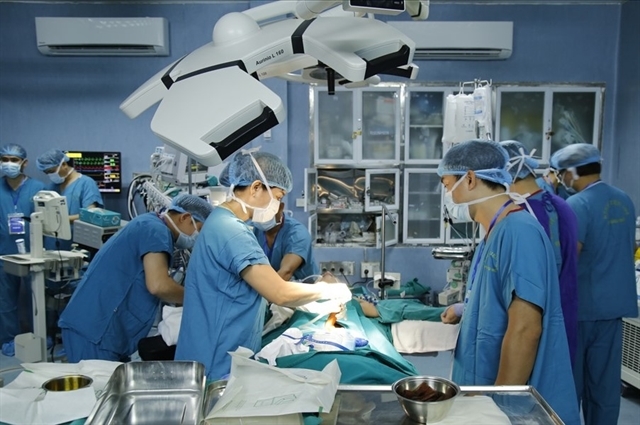 The operations were performed on October 27-28 by doctors of Hanoi-based Military Hospital 103 and their colleagues from Japan’s Tohoku University Hospital.
The first patient, Nguyen Van D., a 42-year-old man, received a healthy bowel from his younger brother, 40, while the second patient, Lo Van T., 26, got a bowel from his mother, 47.

Both patients had suffered from impaired bowel function following surgery years ago.
After surgery, both bowel donors are in stable health conditions. The two transplanted patients are under intensive care with their survival indicators being closely monitored by doctors.

The successful surgery would open up more opportunities for patients who are in need of bowel transplants, Doctor Quyet said.

Deputy Minister of National Defence Pham Hoai Nam praised efforts of the hospital’s medical works for the successful operations and asked the hospital to gain more achievements, contributing to the development of the medical sector of Vietnam and to expand medical co-operation with countries with advanced development in the health sector to get access to and update modern medical technology in health check-up and treatment.

In January, Vietnam conducted the world's first limb transplant from a live donor. The operation was carried out by doctors of the Central Military Hospital 108 in Hanoi.