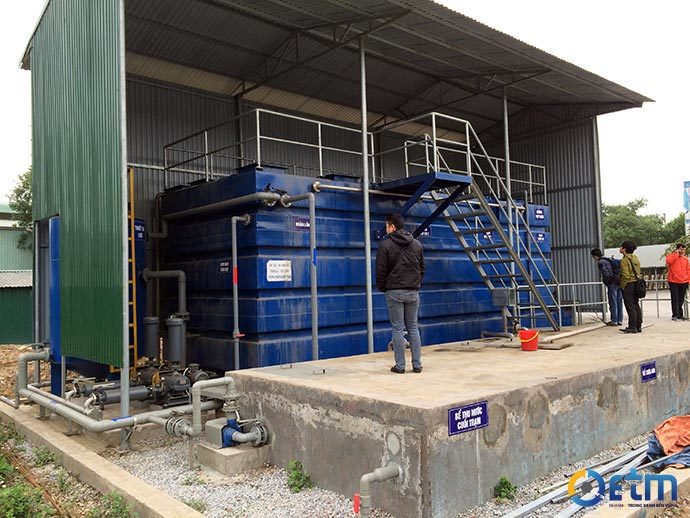 According to MONRE, 283 IZs which produce 550,000 cubic meters of waste water a day, but only 5 percent of IZs have concentrated waste water treatment systems.

According to Nguyen Dieu Linh, branch director of ETM, the waste water treatment is a combination of many solutions effective for every kind of waste.

There are five phases of the waste water treatment process. Waste water, after collected and having large-size impurities, will go to a conditioner tank for flow regulation and concentration stabilization. After that, it will have BOD and COD treated with aerobic microorganisms.

The third phase will convert organic matter into CO2 and H2, and together with the oxidation of NH3, turn into NO2 and NO3. The final product of the process is N2, which is released to the environment.

After that, a mechanical method will be applied to remove suspended substances left. And finally, disinfection will be used to kill harmful bacteria in water to ensure the microbial safety for waste water before it goes to receiving sources.

The treatment path of waste water in IZs will be as follows: The waste water, after being removed of raw large-size impurities, will be pumped into a tank where smaller-size impurities will be removed. In the tank, the gas distribution system will mix to regulate the flow and input waste water concentration. At the same time, the pH will be neutralized by the quantitative chemical system under the control of pH controller.

After that, the waste water will be pumped into another tank, where, under the effect of PAC and polymer, inorganic suspended matter will be bound into flakes which can easily settle down.

The waste water will later go to an Anoxic tank, which can remove a part of organic substances, then to an Aerotank where COD and BOD will be treated, and later to a settling tank and disinfection tank, and finally to pressure filter equipment.

The Ha Long-Cat Ba Alliance has called for addressing the pollution caused by waste water in Ha Long Bay and the Cat Ba Archipelago using technology.