Nano-bioreactor technology has not been able to fully clean the To Lich River in Hanoi.

In May, the pilot program on cleaning a section of To Lich River and a corner of West Lake in Hanoi with Japanese nano-bioreactor technology officially started. 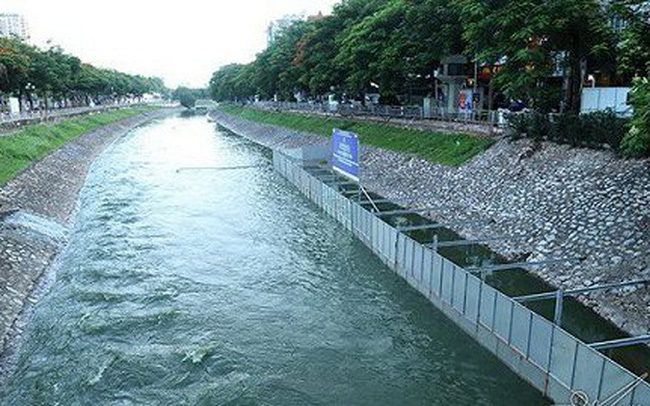 On August 8, a technical advisor to the Japan Trade Promotion - Environment Organization, Kubo Jun, took a bath and dove into the river section cleaned with nano-bioreactor technology to prove the efficiency of the project.

However, asked by the local press about the fate of To Lich River, environmental experts said that, to revive To Lich, Hanoi could not rely on pollution treatment with chemicals or technologies. They said comprehensive measures must be applied to settle the problems.

Vietnamese experts have applauded the efforts by JVE’s specialists.

“I have worked with many Japanese partners. I know they work seriously and their technologies are very good. However, we still need verification to comment about the efficiency of the technology,” said Dang Dinh Kim, former Deputy Director of Environmental Technology Institute of Vietnam Academy of Science and Technology.

Le Huy Ba, former director of the Institute of Science, Technology and Environment Management under the HCMC Industry University, praised the enthusiasm of Japanese specialists. They tried their best, despite Hanoi’s accidental pumping of water from the West Lake to To Lich River, which affected their operations.

Ba thinks that the solution suggested by Japanese specialists should be considered to treat the pollution of rivers, not just To Lich.

Tran Duc Ha from the Vietnam Water Supply and Drainage said the solution used by the Japanese treats pollution in stagnant water areas which do not receive waste water regularly. It is still unclear if it is effective for rivers which receive waste water sources.

Kim also said there has been no official conclusion about the effectiveness of the technology for To Lich, but he believes that nano-bioreactor technology alone will not solve To Lich’s problems.

He suggested using technology to clean stagnant ponds. Japanese specialists said the strong point of the technology is that it can shatter mud.

Meanwhile, Hanoi is planning to dredge West Lake, which will produce 1 million cubic meters of mud. It is still unclear how the mud will be dealt with.

Scientists say that pumping water from the Red River to To Lich will not help settle To Lich’s problems. This method dilutes polluted water but the total waste water doesn’t change.

Authorities in Hanoi are considering a proposal to recover To Lich River, which was once one of the capital city’s most beautiful rivers but has been ruined by serious pollution and the discharge of thousands of cubic metres of untreated wastewater.

Hanoi debates measures to clean up To Lich River

The use of millions of cubic metres of water from the Red River to supply West Lake and clean the polluted To Lich River has been the cheapest and best way to clean the latter river so far.

icon
How high is the environmental cost?
icon0