iPhone XS Max 64 GB was the best selling high-end mobile phone model in July, accounting for 16.5 percent of market share, according to GfK.

The second and third best sellers were iPhone X and Samsung Galaxy S10 Plus, with 15.3 percent and 15 percent of market share, respectively. 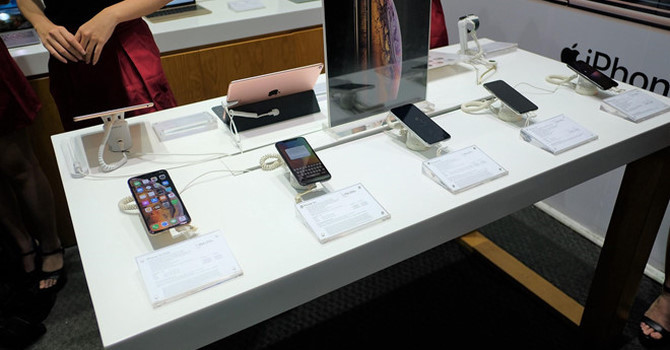 iPhone XS Max is currently the most expensive model from Apple. The model iPhone XS Max 512 GB once sold at VND44 million in Vietnam.

Retail chains reported that XS Max, iPhone XS and XR had slow sales in the first months in Vietnam. The sales were far below the sales of old-generation models such as iPhone X and 7 Plus.

However, after price cuts and sale promotion programs, the sales of XS Max became stable.

At present, iPhone XS Max is sold at VND30 million, or VND4 million lower than it was in November 2018 when it hit the market.iPhone XS Max at small distribution chains costs VND27.5 million.

He predicted that the sales would be even better in the time to come, when the next generation of iPhone is marketed and XS Max, as the older model, will see the price decrease further.

According to GfK, Apple and Samsung are controlling the high-end market segment, understood as products with the selling prices of over VND15 million.

In April, Apple held 59.1 percent of the market share, followed by Samsung with 34.1 percent and Huawei with 6.5 percent. In July, Apple continued holding its No 1 position with 66.1 percent. Samsung had 32.6 percent of market share.

The market share held by other brands such as Huawei and Oppo from China were around one percent. Vivo and Nokia no longer sell high-end smartphones in the Vietnamese market. Other models such as Google Pixel and OnePlus are not distributed officially in Vietnam.

In related news, private shops have cut the prices of iPhone 7 Plus slightly by VND600,000. A phone with 32 GB is sold at VND7.5 million.

4-year-old iPhone 6S Plus still a bestseller in Vietnam

Retailers say iPhone 6S Plus is the second bestselling model among Apple’s products in Vietnam.

iPhone XR price in Vietnam plunges, now cheaper than 8 Plus

iPhone XR is being offered at VND18 million at large retail chains in Vietnam. With a surprisingly low price, XR is even cheaper than 8 Plus.