Vietnamese so love iPhones that they are willing to buy iPhone X with Face ID errors, but the quality of these products remains questionable. 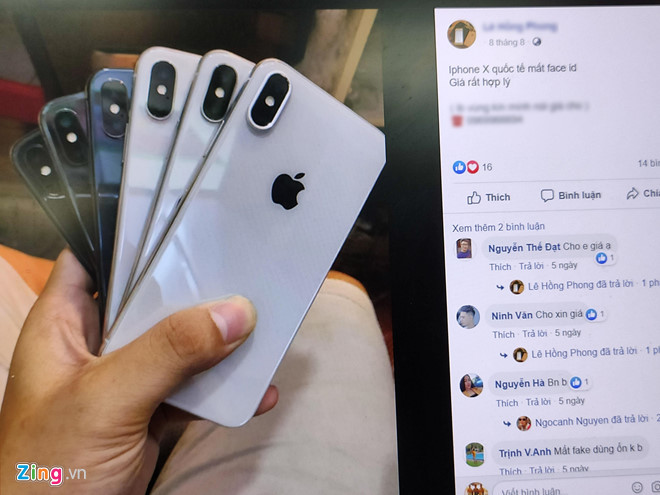 iPhone X 64 GB is being sold for VND10 million, and iPhone X 256 GB for VND11 million. The prices are half of brand new products. The shop’s owner affirmed that except for errors with Face ID, other features can be used smoothly.

Such adverts can be found on used iPhone users’ forums, iFans’ forums and advertising columns.

An observer said the products appeared in Vietnam many months ago, but they have become more common as more imports have arrived.

Asked about the sources of products, a seller said only a small proportion of products is bought from domestic users for re-selling, while most products are imported. The products look like brand new products.

“You cannot unlock the machine with your face because of the error with Face ID, but you can do all other things with it, so I still decided to buy one product,” said Le Anh Vu, an office worker.

“I can save several million dong compared with locked brand new or 99 percent new iPhones,” he said.

Meanwhile, Hoang Manh Hung, a university student, bought an iPhone with Face ID errors because "it is cheaper than iPhone 8 Plus, better designed than iPhone XR and it looks just like iPhone XS and XS Max" .

However, Manh Tuan, an experienced iPhone seller in Hanoi, warned of the risks for those who buy these products.

Private shops all advertise that products only have problems with the face recognition feature.

“The devices may have been hit, dropped or screen may have been broken. The opening of the machine and troubles with cameras all can cause problems to iPhone Face ID,” he said.

He went on to say that Face ID has many sensors which are difficult to fix. The cost is no less than VND3-4 million.

Hitting the market in late 2017, iPhone X is the first generation of iPhone which didnot use a finger sensor. Instead, it uses face recognition technology. The machine uses OLED screen technology with infinity screen. When it first appeared in Vietnam, it sold for VND30 million.

Will unofficially distributed iPhones disappear as a result of Apple’s new policy?

Apple has applied a new warranty policy which appears designed to eliminate unofficially distributed iPhones. It has also taken drastic measures to prevent the use of locked iPhones.