Tens of trillions of dong have been spent to develop the flood control system on HCM City, but the situation appears to be getting worse.

At least five big floods have occurred on Nguyen Huu Canh Street in HCM City since the beginning of the rainy season. 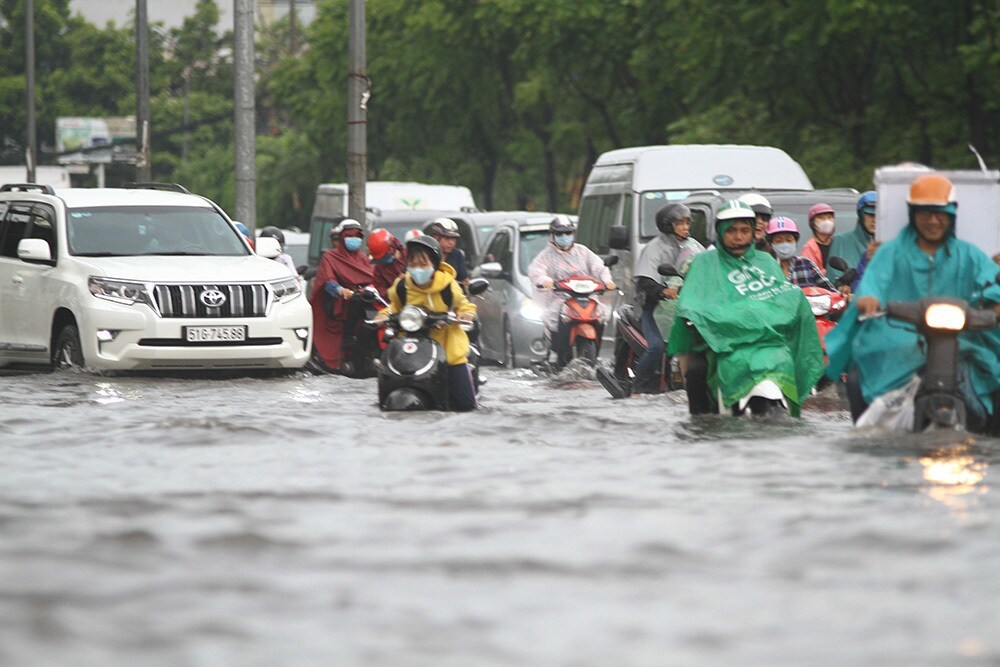 Despite the presence of high-capacity pumps, the street is inundated after 30 minutes of rain. In the latest rain on June 3, motorbike wheels were halfway submerged under water.

The first rain of the rainy season also caused serious floods on the streets of Kha Van Can and To Ngoc Van near Thu Duc Market.

Tran Van Chien, a car and motorbike mechanic on Kha Van Can street, who has been living there for 20 years, said the area never suffered from floods in the past because it was a high area. But as more and more houses have arisen, the drainage system has become overloaded.

“As the roads are high and steep, the water flow is very strong. Motorbikes can be swept away by the water current sometimes,” he said.

“There is only one ‘hot spot’ of floods - the city itself," many city residents joke.

Thoi Bao Kinh Te Sai Gon cited a report as showing that HCM City has spent more than VND25 trillion on anti-flooding projects over the past five years but there are still 22 flood-prone areas.

As the situation is getting worse, the HCM City People’s Committee has submitted to the Standing Committee of the HCM City Party Committee a plan to adjust the master plan on drainage system development by 2030.

Under the new program, the scale of the drainage system would increase by three times compared with the program approved in 2001.

The city will expand the flood control area to 23 districts (except Can Gio) instead of focusing on the 650 square kilometer area (accounting for 32 percent of the city area) in inner city and surrounding areas.

Ho Long Phi, former head of the Institute for Water and Climate Change Studies, said the water drainage programming must be associated with urban area development, transport and environment programs. He believes that there must be space for water storage and drainage in new residential quarters.

Ngo Viet Nam Son, a respected architect, said that if urban areas are programmed well, floods will not occur. Phu My Hung Urban Area is an example: though it is located on low land in district 7, it doesn’t suffer from floods.

Even as the Government has been calling on the private sector to invest in infrastructure projects due to the limited state budget, the sector has been staying clear of waterway and anti-flooding projects.