A new study by Dutch scientists has found that the Mekong Delta is just 0.8 meters above sea water level, which means that 12 million people will have to evacuate in the next 50 years.

Nature Communications journal released on August 28, 2019 warned that Vietnam’s Mekong Delta is sinking more rapidly than initially predicted. The study was conducted by a research team from Utrecht University in the Netherlands. 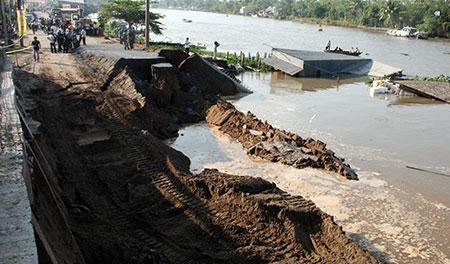 The study also found that the level is much lower than the previous assumption of about 2.6 meters.

More than 500 million people live in the Mekong River Valley. Flooding is due to the combined effect of rising sea levels which causes land subsidence, reduces surface sediments, and increases the water levels. This will eventually lead to the risk of the delta being eliminated.

Philip Minderhoud, the geographer at Utrecht University who led the project, pointed out that underground water exploitation is one of the factors behind the subsidence of the Mekong River Delta.

He said the loss of water leads to z reduction of pressure in the underlying geological structure, causing the delta to subside one centimeter per year on average.

The sea water level is rising by 3-4 millimeters per annum as a result of the climate change. This, plus the weight of man-made structures on the plain, and decreased flow of sediment all have contributed to the situation.

The Dutch scientists predicted that with the current average rate of rising sea water level and subsidence, the delta will be submerged in 57 years. The number of people to suffer will be 12 million, or twice as much as previously predicted.

Nguyen Chu Hoi, former Director of Institute of Economics and Fishery Planning, commented that the warning given by the Dutch scientists is useful, though he thinks the finding may cause controversy because it is different from conclusions made by Vietnamese scientists and other international organizations.

Hoi said Vietnam should consider this information when drawing up the solutions to cope with the problem.

Hoi said the biggest challenge for Mekong Delta is the combined effects of climate change, rising sea water levels, operation of a of hydropower dams in the upper course and zctivities in the lower course (damming, blocking rivers, large-scale sand exploitation, deforestation and rapid urbanization).

New highways in the Mekong Delta region have met transport demand, but have failed to meet the socio-economic potential of the area, experts have said.

Experts worry about the fate of Mekong Delta