Loc Troi Group, an agriculture firm, conducts pesticide spraying by drones on 25,000 hectares of fields in cooperation with farmers in Long An province.

The group estimates that the spraying by drones will allow it to save time (it takes 5-7 minutes only to spray 1,000 square meters) and increase efficiency (by 90 percent). 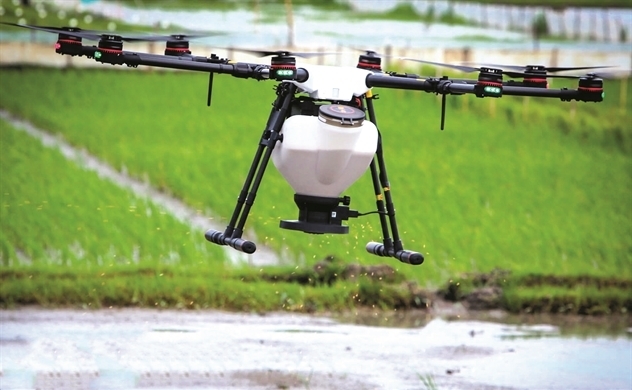 This helps increase productivity, save 90 percent of water, reduce plant protection drugs (about 20-30 percent), reduce the loss of rice (150-200 kg per ha), and protect the health of farmers.

“This is an important step which helps the company accelerate digitization in agriculture and open new business opportunities,” said Huynh Van Thon, chair of Loc Troi.

According to Agras, the importer and distributor of drone, the investment rate for one drone is relatively high for farmers, VND500-600 million.

This explains why only units which own large fields and large agriculture areas, such as cooperatives, groups of farmers and enterprises, can spend money on drones.

Even Loc Troi, a large agriculture production group, at first, only bought 13 drones and used 33 ‘pilots’ to drive the drones.

A representative of the group said if things go smoothly, the group would buy hundreds of drones.

Other companies, including Trung An, Hoang Anh Gia Lai, ADC and Bayer Vietnam, also have drones or provide a drone leasing service.

Trung An has 800 hectares of rice fields and has to pay VND1 billion a year to workers to spray pesticides. Now, with two drones, according to Pham Thai Binh, general director of Trung An, the company can save money.

Digital technology is indeed being used in agriculture but is insufficiently widespread.

Knowledge mismatch hinders IT in agriculture