Phu Yen Police have started the prosecution of 12 illegal loggers related to deforestation in Tay Hoa and Song Hinh districts. 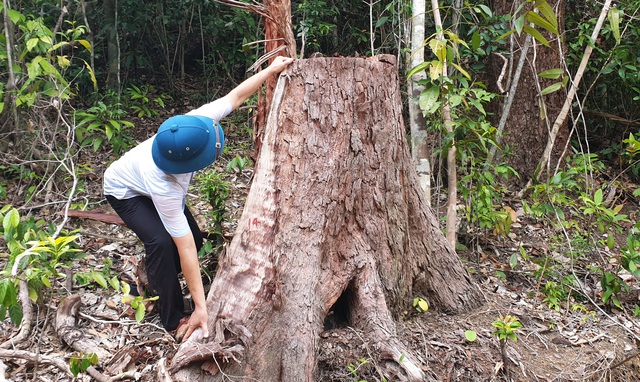 They were prosecuted for violations in exploit and protect forests and forest products regulations in the Penal Code 2015. Seven of them live in Son Thanh Dong Commune, Tay Hoa District and five others live in Hoa Phu Commune. They have been banned from leaving their homes.

Since February, the loggers have opened three paths totalling 2.3 km in length leading deep into the forest. They have taken down at least 335 trees, many of them are old and valuable trees.

The logging hotspot is about 5 kilometres from Song Hinh Hydropower Reservoir. The loggers have already made a one-metre wide path to transfer equipment and vehicles. Large trees were chopped down along the path. The fallen trees are among the largest with a diameter of 30-60cm. The trees were sawn into timber on the spot before they were transported.

Nguyen Van Doan, head of the Department of Forest Protection in Song Hinh District said the logging spot is located deep inside the forest. Since the loggers were active at night with many guards, it had proved really hard to catch them.

The police have expanded the investigation. Dtinews

Seven loggers involved in a massive deforestation case in the central highlands province of Gia Lai in early June have been arrested, Kbang District Police announced on Wednesday.