Vietnamese and Chinese coast guards on December 22-23 successfully conducted a joint patrol in the Gulf of Tonkin, contributing to building the waters of peace, stability and mutual beneficial cooperation.

The inspection took place after the Vietnam-China agreement on fishery cooperation in the Gulf of Tonkin expired on June 30 this year, with the aim of ensuring normal fishing activities while the two countries hold negotiations on cooperation content for the next period.

Vietnam’s ships 8004 and 8003 led by Colonel Tran Van Tho, Deputy Commander - Chief of Staff of the Coast Guard Region 1 Command, and China’s ships 4303 and 22603 headed by Liu Tianrong, Deputy Chief of the Nanhai Division of the Chinese Coast Guard, joined the patrol.

The patrol targeted 13 points spanning 255.5 nautical miles in the sea areas adjacent to the demarcation line in the Gulf of Tonkin.

As initially planned, the coast guards will patrol their own waters and inform each other about found violations. However, the unfavourable weather conditions hindered their efforts to inspect vessels operating in the targeted points.

Although the above-said agreement is no longer valid, Vietnam and China continue to seriously monitor the maritime boundary agreement in the Gulf of Tonkin.

Through the monthly exchange of information about violations by fishing boats, the two sides have raised the awareness of their fishermen about relevant laws and regulations set in the maritime boundary agreement in the Gulf of Tonkin.

The joint patrol result has helped to enforce international law, especially the 1982 United Nations Convention on the Law of the Sea (UNCLOS) and the Vietnam-China agreement on the delimitation of the territorial seas, exclusive economic zones, and continental shelves in the Gulf of Tonkin signed by the two countries on December 25, 2000.

It has also played a role in preserving maritime resources in the waters and ensuring their sustainable exploitation, popularising laws among fishermen while operating at sea, promoting the traditional solidarity, neighbourliness and friendship between the two countries, consolidating confidence and creating friendly and open relations between the coast guards and peoples of the two countries./.VNA 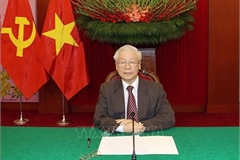