The top Vietnamese and Cambodian legislators have consented to intensify delegation and people-to-people exchanges, and realize signed agreements whilst underscoring the importance of frequently educating the two countries’ people.

Both leaders said Vietnam and Cambodia have taken heed to boosting cooperation in economics, trade, and investment with bilateral trade posting a 23.7% rise year-on-year to US$4.7 billion last year and elevating trade turnover to US$5 billion by 2020.

The top Cambodian legislator affirmed his nation’s strong support for the two governments’ efforts to educate younger generations on maintaining and fostering the bilateral fine relations, strengthen people-to-people exchange and cooperation in defence, security, counterterrorism, and information sharing, and to orientate border areas towards the building of a border line of peace and friendship and development.

He thanked the Vietnamese Party, State, and people for supporting Cambodia in all circumstances, especially in helping the country escape from the Pol Pot genocidal regime in the past and spurring national development at present.

She asked Cambodia to offer the best possible conditions for the search for and repatriation of remains of volunteer Vietnamese soldiers and experts who laid down their lives in Cambodia, as well as the construction, restoration, and repair of Vietnam-Cambodia friendship monuments in the country.

Host and guest noted with pleasure the achievements recorded by both nations in border demarcation and border marker planting as 84% of the work has been finalized.

For borderline sections that have yet to be demarcated, Ngan suggested continued discussions to seek out mutually fair and suitable measures acceptable to both sides.

She hailed Cambodia’s close coordination in granting legal documents to Vietnamese Cambodians, and asked its relevant agencies and localities to soon issue specific and clear regulations on the rights and obligations of those holding foreign registration cards.

Concerning the resettlement of Vietnamese people in the Tonle Sap Lake, Ngan proposed that Cambodia pay attention to ensuring the lives, interests, and assets of relocated people. She affirmed that Vietnam will work hand in hand with Cambodia to help them soon stabilize their lives.

For regional cooperation, Ngan suggested maintaining closer coordination in augmenting cooperation initiatives for their interests and those of the entire region.

She expressed her hope to receive Cambodia’s support and coordination to help Vietnam fulfill its role as ASEAN Chair and ASEAN Inter-Parliamentary Assembly (AIPA) Chair in 2020, and maintain the ASEAN’s intra-bloc solidarity and central role.

Heng Samrin also used the occasion to invite his Vietnamese counterpart to pay an official visit to Cambodia at an appropriate time. His invitation was accepted with pleasure and the visit will be arranged through the diplomatic channel.

After the talks, the duo signed a cooperation agreement between the two legislative bodies and witnessed the signing of a memorandum of understanding on cooperation between the Vietnamese NA Office and the Cambodian NA Secretariat.

The same day, Ngan hosted a banquet in honour of Heng Samrin and his delegation.

Vietnam always places importance and top priority on the development of good neighbourliness, time-honoured friendship, and comprehensive, sustainable, and long-term cooperation with Cambodia.

He congratulated Cambodia on its outstanding achievements in the recent past, including the outcomes of the third mandate municipal and provincial town and district council elections on May 26.

Vuong showed his elation at the deeper and more effective cooperation across a variety of fields between the two countries’ parties and states, which was remarkably attributable to the contributions by the Vietnamese and Cambodian parliaments.

He said he hopes the top Cambodian legislator will strongly support bilateral cooperation policies and continue to enhance experience and information exchanges, bolster coordination at regional and international forums, and direct ministries, departments, and localities to effectively carry out treaties and agreements signed by the two countries.

He suggested that the Cambodian parliament continue facilitating the issuance of legal documents for Cambodian people of Vietnamese origin, and urging Cambodia’s relevant agencies to closely work with Vietnamese counterparts for the early completion and signing of legal documents to recognise the completed 84% of the workload in border demarcation.

Samdech Heng Samrin, in turn congratulated Vietnam on its achievements recorded over the years, and believed that Vietnamese people will succeed with even greater achievements in the renovation process under the leadership of the CPV, as well as achieve the targets set at the 12th Party Congress.

He expressed his deep gratitude for the valuable assistance Vietnam has given to Cambodia in the cause of national liberation and in saving the Cambodian people from the genocidal regime, as well as in the current national construction and defence.

The NA President also briefed the host about the positive outcomes of the talks between the two legislatures, and affirmed that his nation will boost closer coordination with Vietnam to realize agreements, treaties, and joint statements signed during the visits of the two countries’ Party and State leaders. 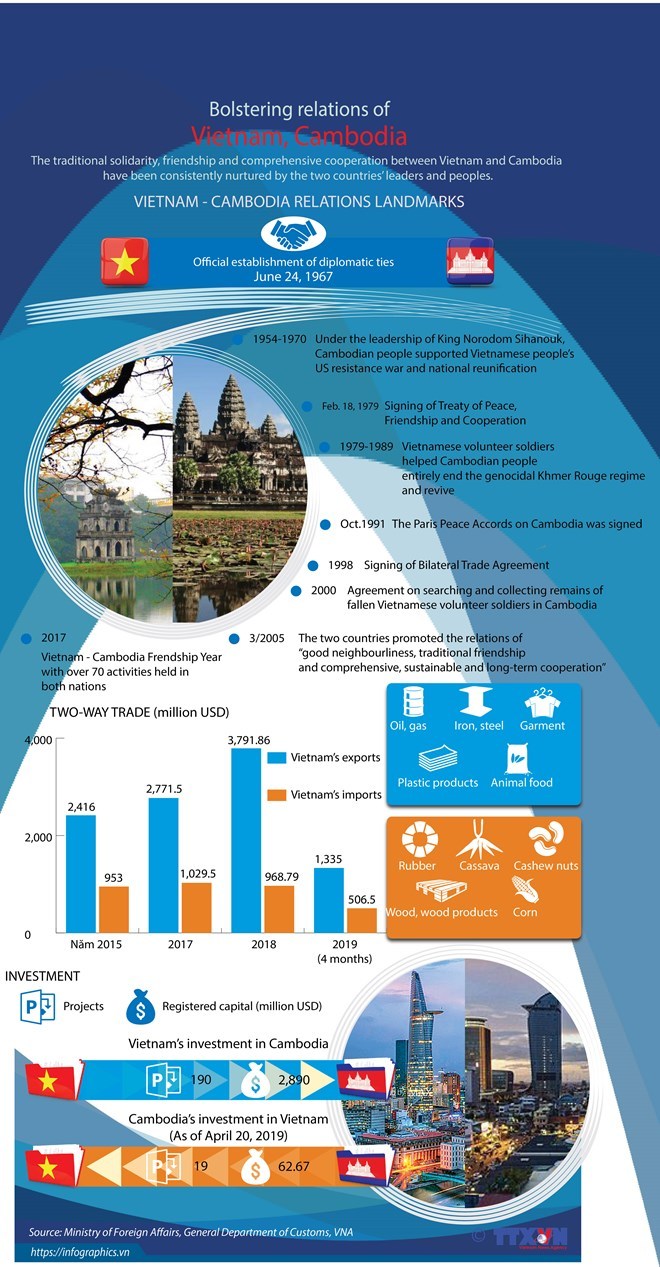