All the moves to support businesses and enterprises hit hard by the pandemic need to be taken promptly, or beneficiaries will continue to struggle. 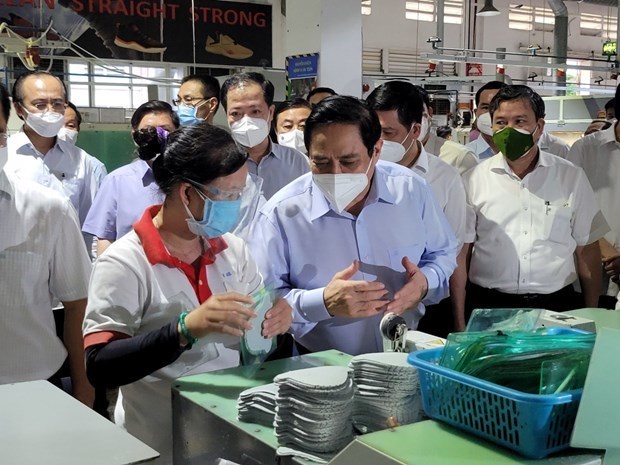 PM Pham Minh Chinh on July 31 agreed on the Ministry of Investment and Planning proposal on reducing the electricity price for the fourth time, applied to certain groups of consumers bearing serious consequences from the pandemic.

A day later, Deputy PM Le Minh Khai requested chairs of cities and provinces to adjust the water price and water use bills of households, especially ones in lockdown areas in accordance with Directive 16.

Also on August 1, Khai asked the Ministry of Information and Communications (MIC) to instruct telecom carriers to remiss telecom charges to support clients.

MIC has promptly asked telcos to draw up plans to ease people’s difficulties.

On August 2, 2021, with the witness of the ministry’s leaders, telcos announced a VND10 trillion support package, which will last three months, commencing from August 5.

On a recently official telegram on fighting against Covid-19, the PM requested provinces and cities to ensure a sufficient supply of food and foodstuff products to poor laborers who have no income at this moment.

On July 1, the Government released Resolution 68, stipulating 12 policies on supporting laborers and employers who are having difficulties because of Covid-19.

One week later, PM released Decision 23 stipulating the implementation of measures to support employees and employers having difficulties because of Covid-19. It requires very simple procedures, allowing quick access to the package.

A stitch in time saves nine

Nguyen Tuc from the Vietnam Fatherland Front, said people were happy about the decisions related to the electricity, water and telecom service bills. Though the amounts are not high, the support is significant to the poor.

He said that the policies adopted by the Government shows that this is the ‘Government of the people, by the people and for people’.

However, he pointed out a problem that all the policies need to be consistent from top to bottom. At present, when top leaders quickly make decisions, the government at lower levels implements the directions slowly.

Pham Van Hoa, a NA Deputy from Dong Thap province, said many people are living in extreme poverty, both physically and mentally.

“The situation is so serious that even the rich people also weep bitterly, let alone the poor."

The deputy from Dong Thap recognized the timely response by the Government when releasing support packages targeting pandemic-hit people and enterprises.

In 2020, the Government launched the VND62 trillion bailout. The VND26 trillion was launched recently. It also set policies on tax remission and is planning other support.

“The policies are humane and timely, which can partially console people in distress,” he said.

Vietnam and HCM City have been receiving a great deal of medical support and vaccine donations from countries around the world to combat the COVID-19 pandemic.

Vietnam's airline industry is facing its worst crisis yet amid the COVID-19 pandemic, an online conference on financial solutions to keep the industry afloat heard on Monday.