State President Nguyen Xuan Phuc and candidates for the 15th National Assembly met with voters in Cu Chi and Hoc Mon districts of Ho Chi Minh City on May 14-15 via videoconference. 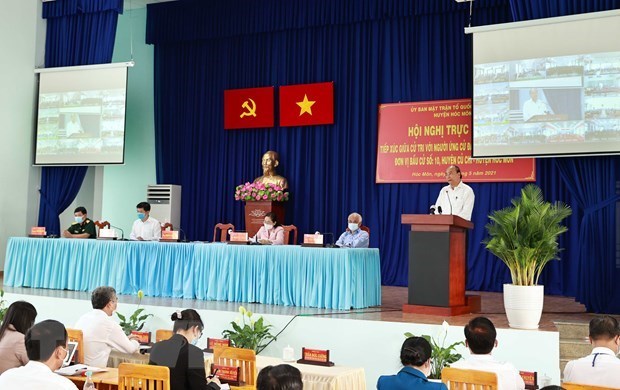 Presenting his programme of action, President Phuc affirmed that he will do his utmost to serve the nation and people.

He stressed the need for deputies to listen to voters’ aspirations and ideas and report them to the National Assembly, Party, State and relevant agencies, and pay more attention to locals’ substantial socio-economic affairs.

It is also necessary to seek measures to reduce time and costs related to administrative procedures to create favourable conditions for locals and businesses, focus more on improving social welfare, and step up the fight against corruption and wastefulness.

The State leader also requested municipal authorities to invest more in areas with slow development, build strong defense and security, exert efforts to improve the position and prestige of Vietnam in the international arena and speed up judicial reform.

For Cu Chi and Hoc Mon, the State President said it is necessary to develop general planning for the two districts in the city’s overall master plan to develop them into an ecological urban area during 2030-2045, with the highlight being the Northwest urban area.

On this occasion, President Phuc also visited and met with voters of Division 9 of Army Corps 4, during which he hailed the unit’s contributions to the national construction and defemce.

Besides, he also visited and presented gifts to several policy beneficiaries in Cu Chi and Hoc Mon districts.

State President Nguyen Xuan Phuc praised achievements of the Boao Forum for Asia over the past two decades in his video speech at the opening ceremony of the event held in Boao city of China’s Hainan province on April 20.

icon
The pandemic is now under control nationwide: PM
icon0

icon
Who is eligible to vote?
icon0

icon
National Assembly election 2021: All you need to know
icon0