Vietnam’s Prime Minister Nguyen Xuan Phuc will visit the Republic of Korea (RoK) at the end of this month. What’s the significance of the event in promoting the two countries’ friendship, especially with Vietnam and the RoK celebrating the 10th anniversary of upgrading bilateral ties to the Strategic Cooperation Partnership level?

First of all, we welcome Vietnam Prime Minister Nguyen Xuan Phuc on November 25-26 for the ASEAN-Korea Special Summit.

The ASEAN-Korea summit, held in Busan on November 25-26, recognises ASEAN as one of South Korea's important partner partners in the New Southern Policy. 'People, Peace and Prosperity' are the agenda of this ASEAN-Korea Special Summit and it aims to maintain and develop peace and prosperity in Asia by expanding mutual exchanges.

The RoK and Vietnam entered into a 'Strategic Cooperation Partnership' (concluded in 2009) after diplomatic relations in 1992, and the relations of the two countries continue to develop.

I expect that both South Korea and Vietnam will lead people, peace and development in all fields including political diplomacy, economy and culture.

What do you think about the role of people-to-people and cultural exchanges in the consolidation of relations between the RoK and Vietnam?

So far, exchanges and co-operation between South Korea and Vietnam have been centred on the relationship between government and government, enterprise and enterprise.

Now, to develop into a ‘Comprehensive Strategic Partnership’, we can develop the culture and history of our two countries by developing into a relationship between people and people.

Between the two countries, I believe the expansion of people-to-people relations and cultural exchanges will play a stronger and stronger role in bilateral relations.

The exchange between South Korea and Vietnam now includes 'family to family ‘,' village to village ',' alley to alley; ',' school to school', 'child to child ', 'youth to youth' and 'senior to senior'.
I think the travel and tourism methods of the people of both countries will help us to understand the home, culture and history of both countries through 'home stay'.

What do you think about current Vietnam and South Korea relations and how do you see bilateral relations developing in terms of politics, economy and culture?

Our relations with Vietnam are kind of high among ASEAN countries. If you look at some indicators like economic and social-culture relations, bilateral relations between South Korea and Vietnam are deep and wide. For example, South Korea-Vietnam bilateral trade accounts for 50 per cent of total trade value with ASEAN countries, or in other words half of our country’s trade is with Vietnam and also our investors left in Vietnam’s economy.

As for socio-cultural relations between South Korea and Vietnam, South Korean's number one destination among ASEAN countries is Vietnam and we have also co-operated in many areas of defence and security issues and I expect Vietnam and our country’s bilateral relations will go further and deepen in the coming years.

With the already laid social, cultural and economic relations, as well as the basis of bilateral co-operation, relations will grow. In some areas like socio-cultural cooperation, I have to mention some elements: there are a quite number of Vietnamese students in South Korea and their performance is good. They will graduate, leave South Korea, return to Vietnam and become bridges between the two countries.

In the future, I believe we have to develop and deepen our co-operation as Vietnam and South Korea are both facing the dilemma between the US and China. Both the governments have to think about how to reduce the negative impacts from their trade war, that’s the way Vietnam-South Korea strategic co-operation will go in the coming years.

In your opinion, what is the position and role of Việt Nam in South Korea’s New Southern Policy?

From 2020, South Korea will start the second phase of the New Southern Policy and next year, Vietnam is the chair country of ASEAN and Vietnam was elected to be a non-permanent member of the UN Security Council in the term 2020-21, so there are a lot of things Vietnam and South Korea can do together regionally and globally.

Vietnam has close relations with North Korea and Vietnam is one of the best countries that can give North Korea fundamental advice on opening up, reform and denuclearisation so in that sense Vietnam plays a vital role not only for the success of the New Southern Policy but also for peace and prosperity on the Korean Peninsula.

As I have mentioned earlier, most ASEAN countries, especially Vietnam, and South Korea are facing the pressure and uncertainties from the fierce competition between China and the US. As the chair of ASEAN, I hope Vietnam will lead ASEAN countries in developing strategic relations with South Korea in the frame of the New Southern Policy. There are a lot of things we can discuss, such as how to reduce the negative impact of the trade war and how to reduce the impact of the strategic competition between the US and China.

Vietnam and South Korea considered ways to bolster trade and investment ties to bring their bilateral trade to US$100 billion next year at the Vietnam-South Korea Business Summit last Friday.

South Korean investors are taking more of an interest in Vietnam's IT and financial sectors given the prospects created by new technology. 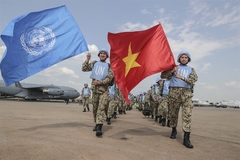 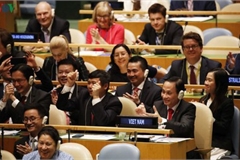 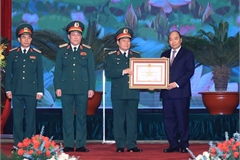 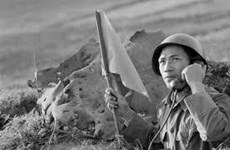 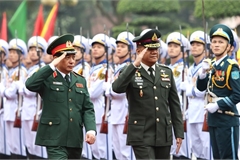 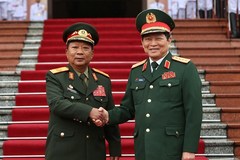 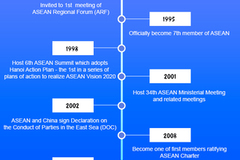 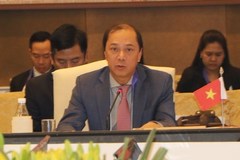 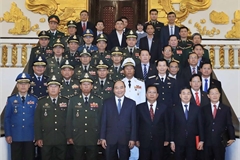 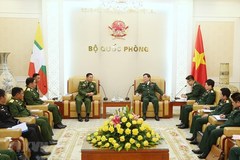 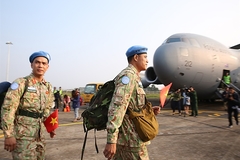 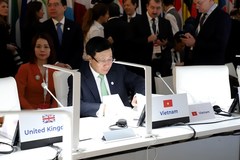