Deputy Defence Minister Sen. Lt. Gen. Nguyen Chi Vinh was granted with the Order of Friendship of Russia on September 23 for his contributions to the comprehensive strategic partnership between the two countries. 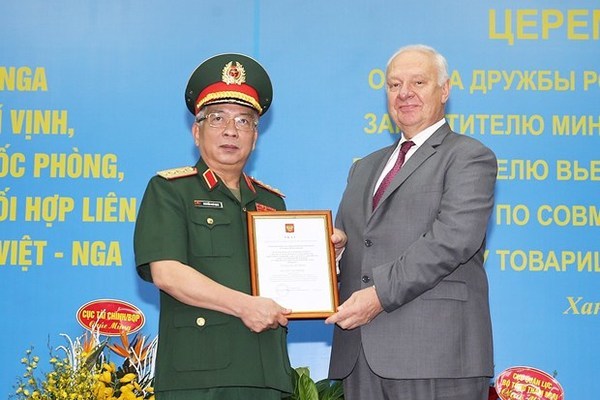 The award decision by Russian President Vladimir Putin was announced at a ceremony at the Vietnam-Russia Tropical Centre of the Vietnamese Ministry of National Defence in Hanoi.

In his speech, Russian Ambassador to Vietnam Vnukov Konstantin Vasilievich highly valued the two countries’ comprehensive strategic partnership, of which cooperation in military technique is a key field that has constantly been enhanced.

He expressed his belief that as head of the Vietnamese sub-committee of the Inter-governmental Coordinating Committee for the Vietnam-Russia Tropical Centre, Vinh will contribute more to the coordination with the Ministry of Science and Higher Education, other ministries and sectors and the Embassy of Russia so that the centre will further develop and fulfill the tasks assigned by the two states.

Thanking the Russian State and Government for the distinction, Vinh noted that over the past almost seven decades, the solidarity and friendship between the two countries’ militaries and peoples have remained strong. The Vietnamese people always keep in mind and appreciate the wholehearted, enormous and effective support that the people of the Soviet Union in the past and Russia at present have given to Vietnam’s struggle for national liberation and development, he stressed.

The official added that over the more than 30 years of development, the Vietnam-Russia Tropical Centre has become an effective cooperation model in military science-technology and held an important position the countries’ relations, adding he believes that the comprehensive strategic partnership, including cooperation in defence and military science-technique, will keep developing.

He also voiced his hope for more support from the State and relevant ministries and sectors of Russia so that the centre will obtain more achievements in the time ahead./. VNA

icon
A tough road awaits the new US President
icon0