The Politburo has recently issued Conclusion No.120-KL/TW on overseas Vietnamese (OV) affairs in the new situation. 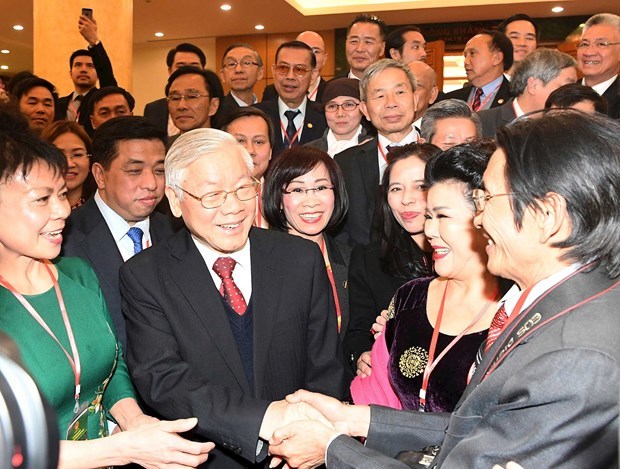 The conclusion said after over five years of implementing the Politburo’s Directive No.45-CT/TW dated May 19, 2015 on continuing to step up the implementation of the Politburo’s Resolution No.36-NQ/TW dated March 26, 2004 on OV affairs, the Vietnamese community abroad now counts about 5.3 million in over 130 countries and territories, over 80 percent of which are developed nations. A majority of overseas Vietnamese have legal status and stable life, and well integrate into the host society. Wherever they are, they always look toward the homeland, becoming an indispensable part of the Vietnamese nation and an important resource to contribute to the cause of national construction and development. With the country’s increasingly improved position and prestige on international arena, their trust has been more and more reinforced.

Such changes are the result of the overseas Vietnamese's efforts toward the nation and the active involvement of the entire political system and people. However, the OV affairs still show some shortcomings.

To continue effectively carrying out Resolution No.36 and Directive No.45 on OV affairs, the Politburo asked Party committees and organisations to raise awareness and sense of responsibility for performing the Party and State’s policy of great national unity among the OVs. They are required to urge the OVs, especially young people, to contribute to the development of the host countries, thus becoming a bridge to foster ties between Vietnam and nations. Those who make active contributions to the cause of national construction and defence will be promptly honoured.

The Politburo asked for enhancing collaboration with the host authorities, adopting comprehensive measures to assist OVs, especially those in disadvantaged areas, as well as further improving the efficiency of citizen protection work and management of workers and students.

Further attention should be paid to increasing international cooperation in justice, security, crime prevention and control, and effective crackdown on human trafficking, illegal immigration and residence, thus ensuring security in communities and thoroughly dealing with violations by OVs in the host countries.

Other tasks include promoting the strength of the great national unity, fine-tuning legal system, reforming administrative procedures, performing synchronous polices involving OVs when they come back home to work and reside, meeting their need for citizenship in accordance with Vietnam’s Constitution, laws and Resolution No.36, and perfecting a mechanism to receive and effectively bring into play ideas by Vietnamese experts, intellectuals and businesspeople abroad.

Various activities have been held by overseas Vietnamese over the past few days to celebrate the 131st birth anniversary of late President Ho Chi Minh (May 19, 1890 - 2021).