PM Chinh and other candidates running for seats in the 15th National Assembly met voters in the Mekong Delta city of Can Tho’s constituency No. 1 on May 8. 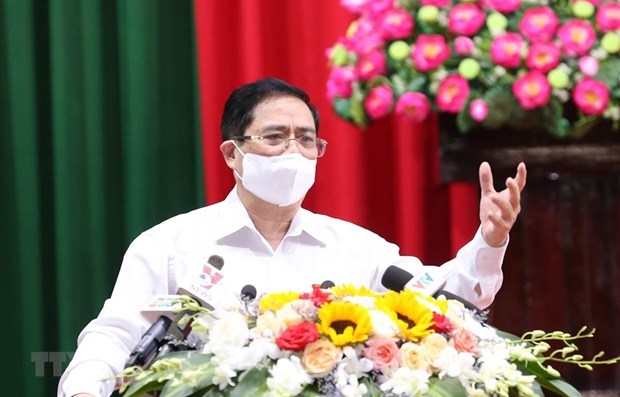 Prime Minister Pham Minh Chinh has pledged that he and the Government will work hard, together with the whole political system, army and people, to promote the country’s achievements and overcome difficulties and challenges so as to further boost its development and successfully implement the Resolution of the 13th National Party Congress.

PM Chinh and other candidates running for seats in the 15th National Assembly met voters in the Mekong Delta city of Can Tho’s constituency No. 1 on May 8.

The PM said that over 35 years of “Doi Moi” (renewal), Vietnam has gained great achievements. However, the country is facing big challenges, including the aging population, exhausted natural resources, climate change and non-traditional security issues, he noted.

The Government leader pointed out three key pillars for the country’s development – people, including their brainpower and values, value of nature and natural resources, and national historical and cultural values. He also stressed the need to promote the national great solidarity bloc for national development.

Regarding the action plan designed by the Government to realise the Resolution of the 13th National Party Congress, PM Chinh said that the plan was made to suit the reality and will be implemented in a comprehensive and synchronous manner with a proper roadmap and certain priorities.

On the development of the Mekong Delta region, including Can Tho city, he said that the 20-million-strong region has yet to fully tap its potential, advantages and competitiveness edge.

Regarding transport infrastructure, the PM said it is necessary to focus on studying and re-planning the transportation system of the Mekong Delta region, and outline solutions and mechanisms for developing inland waterways, seaports, roads, expressways and airports in the region.

He suggested local authorities uphold the spirit of self-reliance, join hands with the Government to further promote socio-economic development in the Mekong Delta, effectively perform the Government's Resolution on sustainable development of the Mekong Delta to adapt to climate change, and the Politburo’s Resolution on building and developing Can Tho city to 2030, with a vision to 2045.

For Can Tho city, he underlined the need to build the city into a political, economic and culture centre and a hub of transport, logistics services and agriculture of the whole region.

The Government leader also discussed COVID-19 prevention and control efforts with local voters, noting that it is essential to oppose tendencies of being distracted, panic, and extreme in the fight against the pandemic.

The PM urged the entire people, including voters in the Mekong Delta region, Can Tho city in particular, to voluntarily and strictly follow regulations on COVID-19 prevention and control.

Voters in Ninh Kieu, Cai Rang and Phong Dien districts of Can Tho city highly valued action programmes of the candidates, expressing their opinions and recommendations on issues of the country and people.

They hoped that if the candidates are elected, they will effectively implement their action propgrammes, and solving well issues that voters care about.

icon
The pandemic is now under control nationwide: PM
icon0

icon
Who is eligible to vote?
icon0

icon
National Assembly election 2021: All you need to know
icon0